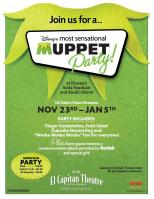 The historic (and Disney-owned) El Capitan Theatre in Hollywood, on Hollywood Boulevard, where many scenes from The Muppets were filmed earlier this year, is hosting a special event this November through January to welcome the arrival of the first theatrical Muppet movie in 12 years. The event is being billed as The Most Sensational Muppet Party and takes place at The El Capitan and the adjacent Disney Soda Fountain and Studio Store. From November 23rd to January 5th, families can join The El Capitan for finger sandwiches, fruit salad, cupcake decorating, and “Wocka Wocka Wocka” fun for everyone. In addition, every guest receives a commemorative photo and and a special gift. The El Capitan is also stating that there will be a Holiday Sing-a-Long with Kermit and Miss Piggy LIVE on stage before every movie. If you’re in the Los Angeles/Hollywood area, this sounds like an event you can’t pass up! For more information, check out The El Capitan online.

As you all know, last week Animal and Miss Piggy appeared on The Tonight Show with OK Go. Unfortunately, in an egregious error we never posted a link to the video. Thankfully, our good friends over at ToughPigs did all the hard work for us so all we have to do is mention their name and show off the video. So… thanks for that.

Our good friends at the Center for Puppetry Arts in Atlanta, Georgia are having an amazing auction to benefit the center and all the good it does to spread the magic of puppetry throughout the world. This is a fantastic cause that I whole-heartedly support, especially when they offer spectacular auction items such as the gorgeous Palisades Toys Jim Henson action figure signed by puppet designer Bonnie Erickson. This also includes a candid shot of Jim, Bonnie, and the Jim Henson Muppet, also signed by Bonnie. It’s a wonderful piece, and you should bid on it!

Finally, the chronicles of our friend James Carroll, designer of our awesome main page header, and the Threadless Muppet contest have come to an oh-so-satisfying conclusion. His gorgeous and explosive “Muppetational Mosaic” t-shirt is now available for sale online! For 48 hours only, you can buy the fantastic t-shirt for just $10.00. So… go buy two or seven while they’re cheap and while they’re awesome. Well… I guess they’ll always be awesome. But still. Buy one. And wear it. Everywhere. How often can you own a t-shirt with Thog, George the Janitor, and Angus McGonagle on it? Never, that’s how. 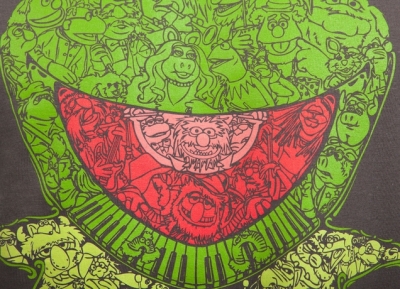