For The Muppets and Me at D23, Part 1, check out yesterday’s post! 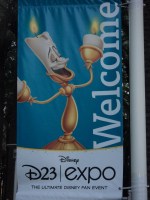 Ryan Dosier – Welcome back to The Muppet Mindset’s coverage of the 2011 Disney D23 Expo and beyond! How can our coverage get any better than Kermit and Rowlf sharing a duet and break downs of two exclusive clips from The Muppets? Well… how about two Muppet performers? Curious? Good. Follow along, won’t you?

On Saturday at the Expo I was walking around the show floor, making my way to the back of the line to see The Lion King 3D. Lucky for me (and unlucky for Simba), as I was making my way there I happened to see two very familiar looking men hanging around at one of the booths on the show floor chatting away to an exhibitor. I wandered closer and realized, much to my extreme delight, that it was none other than Steve Whitmire and Eric Jacobson. Lucky for me, I was wearing my “themuppetmindset.com” t-shirt on Saturday, so when I introduced myself to Steve he became ecstatic upon reading my shirt and meeting a Muppet fan-site operator. Here, have a picture…

Steve Whitmire is an amazing person to meet. He is so approachable and funny and friendly from the get-go. It’s really quite difficult to describe him… but he really is just brilliant. Smart and wise and hilarious. Steve and I talked for about twenty minutes after I introduced myself and once we got past my string of compliments and near-fainting spells we had a great conversation about the new movie and Steve’s thoughts–a conversation completely started and steered by him. He mentioned that, in the beginning of The Muppets, Kermit is very much restrained and somewhat defeated by his friends leaving. However, even though he didn’t tell me out right, based on what Steve said Kermit returns exactly to form by the end of the film. It’s great to know that there is growth and development for the Frog.

Steve also said that he hadn’t seen any footage from the movie–other than the trailers–were the two clips shown earlier that day. He was really excited by how they looked. Then he asked how I liked the clips, and I told him my honest opinion–which we’ll get to later–and he made me promise that when the movie came out and I reviewed it for the Mindset I would be honest about my thoughts. He was very adamant in saying that fan reactions are the ways in which both the performers and Disney see what they could do better. So, of course, I promised I would–and then the full force of the fact that I had just made a promise to Kermit the Frog hit me.

Then Steve pulled Eric over and introduced me to him–but it turned out, again, that I didn’t really need much introduction. Once Eric saw the shirt he knew who I was. It’s such a weird thing, having Muppet performers recognize and know of you–that’s the fan’s job! But I’m not complaining. Have another picture…

Eric was just as humble and friendly and complimentary as Steve, with the added bonus that he comes off as just as huge of a Muppet fan as me, or you, or anyone who reads the site. He talked about the Muppets and their projects with gusto and appreciation. I could just tell that he loves and respects them immensely. I mentioned the great viral videos and Eric told me that those were his favorite projects that he’s worked on. We also talked a bit about his being cramped in the motorcycle side-car earlier (I think he said something about “the diva demands it”), Muppet fan sites, and the new movie. He said, quite excitedly, “If the movie is half as good as the trailers, we’re in for a great time.” Like Steve, Eric felt great about the work they had done on the movie and kept reiterating how much he was looking forward to seeing it.

Afterwards I took the pictures above with them and, being the amazing two individuals that they are, both Steve and Eric (and Kermit and Piggy) signed a mini-poster for me that the El Capitan Theatre Hollywood booth was handing out (see right). I really just can’t even describe the magic and enthusiasm and heart that comes from these guys. Both Steve and Eric (and every other Muppeteer I’ve met, for that matter) are nothing short of awesome, wonderful, friendly, humble, smart, and complimentary. Both of their closing words to me were, “Keep up the great work! We need you guys to love us and tell us when we mess up!” I couldn’t–and still can’t–thank either of them enough. Steve, Eric, if you happen to be reading thank you a million times again. You made my Expo! (And you have my email… just a reminder.)

And then, as if all that weren’t enough, after the Expo on Saturday I met up with Danny Horn who is really (or at least should be) a Muppet celebrity in his own right. Danny started ToughPigs.com and Muppet Wiki and, as someone said the other day, really made online Muppet fandom what it is today. Anyway, Danny and I and his awesome friends Ed, Kyle, and Rolf, went to Disneyland where we messed around Muppet*Vision 3-D, rode it’s a small world, Pirates of the Caribbean, and saw the amazing fireworks show, “Magical.” Danny is awesome… simply put. We had a great time and then hung out on the last day of the Expo. A fun, fun guy and one of very few people I’ve ever met who I can have a real, educated, and intensely-charged “flat-head Kermit” discussion with. Oh, and thanks for the crown. It made my day–and then a small child’s day too.

That’s about all we can fit in this post without scaring away all of our readers. But check back tomorrow for the third and final part of coverage of my trip to California including my once-in-a-lifetime journey to The Walt Disney Studios and my thoughts and opinions on the exclusive clips from The Muppets that I got a chance to see!