Jarrod Fairclough Presents: The Ramblings of a Muppet Nerd

I often forget that other people’s lives aren’t as Muppet related as my own. And when I say often, I mean almost every day. It seems that I’m always saying Muppet quotes, singing Muppet songs, and referencing them to people who have no idea who they are. It happens a lot at work.  I have a new manager, named Didier. Which rhymes with Lydia. Which lead to me, for hours, singing “Didier the Tattooed Lady,” and laughing constantly. I can tell you right now this didn’t end well. At all. Because apparently that’s not the first time someone’s sang this around him. This other time, I drove a fellow worker home, and as she’s about to get her licence, she asked me where I got mine. Now, I knew she meant which DMV I went to, but I instantly, like a reflex, said “I took a correspondents course,” which of course, she didn’t get.

A while back I went on a road trip with some friends, and I was one of the 4 people that took a car. So, a mate of mine was in with me, and I put in my iPod. I have A LOT of Muppet music on there, from Sesame Street albums to the Fraggle Rock Theme. And I made my mate listen to every single one of them. He wasn’t impressed, and asked to switch cars at the next rest stop. So I drove alone for an hour, singing at the top of my voice, much to the enjoyment of the car of attractive girls driving next to me on the highway. 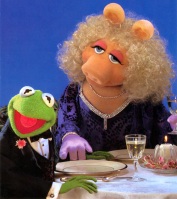 As I’ve stated on this site before, I own almost 25 Muppet related t-shirts, with more ordered from Threadless and Red Bubble on their way. I went to uni the other week, and a girl in my class asked why I own so many. I told her it’s because the Muppets are the greatest thing in the world, the one thing in the world that has bought me constant joy. She replied with “That can’t be doing wonders for your love life…” Touché. But that got me thinking about this very topic I am talking about. Not all girls are going to appreciate my Muppety life. Those girls are not the girls for me.

So that’s my first post in this new series.  I decided to cancel “The Best Of: According to Jarrod” the moment that SesameStreet.org out-awesomed themselves and added a zillion more characters to the video page.  Be sure to join me next time for my extensive list of TV shows I want Muppet’s to appear on, and pending the length of that article, my love letter to Jason Segel.

Be sure to dance your cares away…
Jarrod

6 thoughts on “The Ramblings of Jarrod Fairclough, Muppet Nerd”