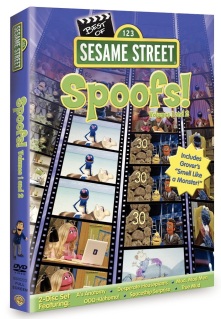 Ryan Dosier – Today saw the release of a brand new 2-Disc set of classic Sesame Street magic at its very best. Best of Sesame Street Spoofs! is a must-buy for all Sesame fans, featuring over two hours of classic, hilarious, and smart parodies of some of the most famous music, television shows, movies, and more of all time, put on by the Muppets of Sesame Street. This includes old favorites such as “Monsterpiece Theatre,” “Born to Add,” and “Beat the Time” along with more contemporary spoofs like “Mad Men,” “30 Rocks,” and “The Closer.” Sesame Workshop did double-dip with some sketches that had been previously released on DVD, but there are quite a few included on this 2-Disc set that have never been available to own until now.

Much like the 2009 2-Disc set, Sesame Street: 40 Years of Sunny Days, the Spoofs are separated onto two discs by the years they were made. Disc 1 focuses more on Old School, classic sketches from the beginning of Sesame Street in 1969 to the late 1980’s, while Disc 2 has contemporary parodies from the 1990’s all the way until Season 41. All of the sketches that are included in the set are absolutely brilliant. There isn’t one weak link as you sit and enjoy it, parody by parody.

I hadn’t seen many of these sketches before so it was a real treat for me to enjoy one of my favorites like Forgetful Jones’ “Oooo-klahoma!” one second then a gem like “Casablanca Alphabet” the next (“Say it again, Sam…”), which I had never seen before. That’s what is so great about major Sesame releases like these… there’s always a great mix of old favorites and exclusive rarities to entertain and dazzle.

The run time of Disc 1 (called Volume 1) is 62 minutes and the run time of Disc 2 (Volume 2) is 59 minutes, so for just $15, you get over two hours of terrific Sesame spoofs–along with bonus spoofs included on each disc. The set is packaged much like the 40 Years of Sunny Days set, in that both discs come in two thin, plastic DVD shells which are both encased in a thin cardboard box. Perhaps my only complaint about this set is that the box is very, very thin… but it seems that it will hold up if you don’t put too much wear and tear on it.

The set is being billed as “Volume 1 and 2,” meaning that there is quite a good chance we’ll be seeing future releases in the Best of Sesame Street Spoofs series. Personally, I hope to see future “Best of” releases that aren’t merely restricted to Spoofs. I would love to see “Best of” specific characters (e.g., Bert and Ernie, Grover, Big Bird), “Best of” sesame Street Travels (e.g., Hawaii, New Mexico, etc.) packaged in great, 2-Disc sets spanning the entire run of the show. It seems likely that we’ll see more releases like this… fans of the classic and contemporary Street should certainly cross their fingers for such a thing.

In the end, I can’t recommend this DVD highly enough. It’s a magnificent collection of brilliant Sesame Street gold, showcasing the talents of the Muppet performers, the Sesame writers, and even the versatility of characters like Cookie Monster and Grover. You get 2-Discs, over 2 hours of Sesame Street, all for under $20… what’s not to love about Best of Sesame Street Spoofs! Volume 1 and 2? Not much.