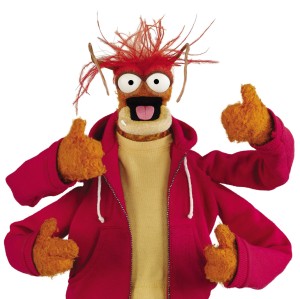 Well known quotes…
“I am not a shrimp–I am a king prawn, okay!”
“You tell him… and I will smack you. I will smack you like a bad, bad donkey, okay!”
“I like my coffee like I like my womens–a latte.”
“Si, and I’m so gosh darn sexy, it hurts.”

WHO IS PEPE THE KING PRAWN? 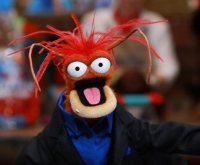 Pepe the King Prawn is not a shrimp–and don’t ever try to tell him otherwise, okay? He is the only one of the new Muppet characters introduced in the short-lived television series Muppets Tonight to break the mold and become a part of the main cast of Muppets alongside the likes of Kermit the Frog and Miss Piggy.

Pepe was not always a star, however. When he first arrived on the scene in 1996, Pepe was no more than a background, one-note character. In his first appearance in the second episode of Muppets Tonight, Pepe merely hung around in the background. It wasn’t until Episode 107: Sandra Bullock where he was fully introduced as one half of a singing/dancing/comedy act with Seymour the Elephant. After Pepe’s infamous “El-if-ino” joke bombed with the studio audience, he and Seymour were yanked off stage by a cane and a star was born.

Pepe would appear alongside Seymour throughout the run of Muppets Tonight where they would work as the KMUP Studio cooks, host their own cooking show, “Hey, What Smells (So Good? It’s Time to Cook With Seymour and Pepe),” and act as Jason Alexander’s dual-conscience.

It wasn’t until Muppets From Space (1999) that Pepe first started appearing as a solo. In the film, he lives in the Muppet Boarding House with the rest of the Muppets, but Seymour is nowhere to be seen. Instead, Pepe developed a cheeky friendship with Rizzo the Rat, scamming Gonzo into building a jacuzzi (so they will come, okay?) and joining Kermit, Fozzie, Miss Piggy, and Animal in rescuing Gonzo and Rizzo from C.O.V.N.E.T.

Muppets From Space was a huge turning point for Pepe’s career. From then out, he was no longer a cheap act with an elephant; he was now an ad-libbing, extremely funny, somewhat racy, almost anti-Muppet who could hold his own alongside established characters like Gonzo and Kermit. In the early 2000’s, Pepe would become one of the main Muppet characters. In fact, from about 2000 to 2002, Pepe appeared more often than Miss Piggy, Fozzie Bear, and other popular characters. He became so well-loved that in 2002 Pepe became the official spokes-prawn for Long John Silver’s restaurants, appearing in national commercials and on their website.

In It’s a Very Merry Muppet Christmas Movie (2002), Pepe was a featured player once again, becoming seduced by the villain, Rachel Bitterman (Joan Cusack), into working for her as an assistant. It was Pepe who saved the Muppet Theater at the end of the telefilm, securing the paperwork to make it an historical landmark. This was Pepe’s largest role at that point, practically solidifying himself as one of the main six Muppet characters: Kermit, Piggy, Fozzie, Gonzo, Animal, and Pepe. On the DVD for the TV special, Pepe hosted all of the bonus features with a new segment titled “Inside Pepe’s Studio.”

The Muppets’ Wizard of Oz (2005) saw Pepe’s return to stardom and his acting abilities tested as he played Toto, usually a non-speaking part, which he fully made his own, stealing every scene he was in and, according to most fans, becoming the best part of the television movie. To promote the film, Pepe appeared on The Late Late Show with Craig Ferguson where he got to be racy and raunchy, talking about various women, engagements, and more. Pepe would once again appear on the show in 2008. 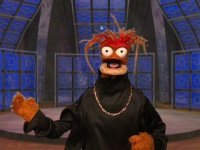 In the 2005 Disney DVD re-releases of The Muppet Movie, The Great Muppet Caper, The Muppet Christmas Carol, and Muppet Treasure Island, Pepe hosted a new special feature segment called “Pepe Profiles” where, on the respective DVDs, he interviewed and profiled the four main Muppets: Kermit the Frog, Miss Piggy, Gonzo the Great, and Fozzie Bear.

When Disney launched its new Muppets.com in 2008, Pepe was one of the six Muppet characters given his own “room” on the site, where new videos of Pepe were showcased. In the videos, Pepe was seen pogo-sticking with Rizzo, riding in the elevator, going to a drive-thru, interviewing celebrities at the Grammys, teaching Tae Prawn Do, developing a new, ultra-popular act: Topo Sticky, and hosting Elevator Bingo, the biggest game show craze since nothing.

2008 was a banner year for Pepe, as he wrote his first book, It’s Hard Out Here for a Shrimp: Life, Love, and Living Large offering his special take on women, money, friends, family, and numerous other subjects delivered in humorous quips as dictated to Jim Lewis.

Studio DC: Almost Live! (2008) also featured Pepe fairly prominently, where we saw he and Rizzo acting as managers to Dr. Teeth and The Electric Mayhem, conning Miley Cyrus into performing with them. Normally one to scrap at any form of cash, Pepe and Rizzo stated that they could be paid in “Cash.” “All credit cards accepted.” “Personal check.” “Belgian waffles…” In the second installment of Studio DC, Pepe and Rizzo attempted to sell their new act: “Polka Rap” which combines the two musical styles for an… interesting outcome.

Pepe closed out the year with a major role in A Muppets Christmas: Letters to Santa (2008) where he traveled alongside Kermit, Fozzie, Gonzo, and Rizzo to reach the North Pole and find Santa Claus–even though he spent most of the special arguing the existence of the jolly fat man. In the special he fell for Joy the Flight Attendant (Uma Thurman) and Claire’s Mom (Jane Krakowski), tried to get a favor from the mafia, and wound up becoming a fabulous opera singer thanks to a little Christmas magic.

Since then, Pepe has appeared in the Muppet group whenever a large group was shown, including the “Bohemian Rhapsody” viral video (2009), singing “Jingle Bells” with Andrea Bocelli (2009), crooning about the nine ladies dancing in “The 12 Days of Christmas” on Late Night with Jimmy Fallon (2009), offering “mini-apple-juice” and “mini-soda” on Extreme Makeover: Home Edition (2010), freaking out about a prawn being eaten on America’s Funniest Home Videos, and volunteering in most of the promotion for Disney’s “Give a Day, Get a Disney Day” campaign (2009/2010).

Pepe’s most recent role was alongside Cat Cora and Angelo in The Muppets Kitchen with Cat Cora (2010). At the end of every installment, Pepe reminded the viewers where they could find the recipes and more Muppety fun. He also acted as a co-host in the short-form series “Hasty Tasty Cooking Tips.” 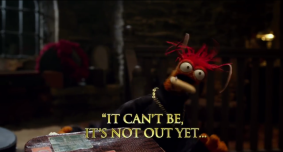 Pepe appeared for a cameo in one scene of The Muppets in 2011. Pepe was brought on as Miss Piggy’s new dance partner after Kermit slighted her. Pepe was crushed by Miss Piggy’s talent (and other things) during their rehearsal for a Dirty Dancing-inspired number. Pepe also appeared in Muppets Most Wanted in 2014 in a much more substantial role, making a few wisecracks and singing a line in “Something So Right.” On the soundtrack for the film, Pepe sang extended verses on “El Muppet Show Theme” and “Moves Like Jagger.” 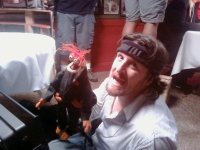 Bill Barretta has been the sole performer of Pepe since his very first appearance fifteen years ago. Barretta was instrumental in developing not only Pepe’s personality, but his mannerisms as well. Pepe’s trademark “okay” which comes at the end of many of his sentences comes from Barretta’s wife’s aunt, who would always tack “okay” on to her sentences even when it wasn’t needed. When asked why he thought Pepe rose to the popularity that he has, Barretta answered, “I don’t know exactly. Maybe timing? Or maybe he’s just a little bit more naughty than most of the Muppets and people like naughty puppets?”

So yes, even Pepe’s performer can’t figure out why he became a star… but I’m sure Pepe could answer that if asked.

WHY DO THE MUPPETS NEED PEPE THE KING PRAWN? 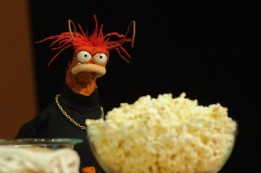 I’ll be the first to admit that I’m a little biased when it comes to Pepe–I’ve had the huge honor of meeting Bill Barretta–but even years before that Pepe was one of my very favorite characters. I just find his mannerisms and ad-libs and interactions so ridiculously funny. He’s clueless, but he’s conniving. He’s menacing, but he has a heart of gold. He’s raunchy, but he’s naive. He’s not your typical Muppet, but he totally is. Where else but a Muppet can you find

the same mixture of humor, heart, and cheekiness? Pepe can be placed anywhere–Oz, a bank, a drive-thru, a campfire–and make the situation funny just with a look or a sentence.

I think what I love most about Pepe is that he is so unscripted and wacky all the time. He doesn’t stop firing off jokes, or quips, or comments. Pepe really is the uninhibited (okay, not completely uninhibited) showcase of Bill Barretta’s comedic and performing talents–talents that I think rival that of any and all Muppeteers. Bill and Pepe’s way of delivering a line or interacting with Rizzo, or Kermit, or Seymour, or Gonzo is always hilarious, and all of these things combine to make Pepe one of the great Muppet characters. I dare you to watch the Elevator Bingo sketch on Muppets.com and not agree with me.

Over the past decade or longer, the Muppets haven’t exactly been in their prime, and no one would dispute that. But with the inclusion of Pepe, they found a new voice for a new age. It really is a wonder to see how far Pepe has come–and to think that he has been around for 15 years and can still be considered a new character. Hopefully Pepe will steal a few scenes in The Muppets this fall and cement himself as a favorite Muppet character with any and all fans–where he absolutely deserves to be.