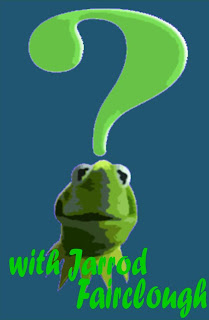 Jarrod Fairclough Presents: “?”
Because Asking Questions Is A Good Way To Find Out Things
Question: What is the Best Sesame Street Toy?
THE ANSWER!

This is of course the follow up to my question “What is the best Sesame Street toy?”, and I received a few answers from people around the Muppet fandom world.  So let’s just jump in shall we?

Out first answer comes from our good friend Joe Hennes from ToughPigs:
“The Pook-a-Looz are really great plush. I gave one to my nephew a few months after he was born, and it’s pretty much the most adorable thing ever. I was going to give him Fozzie, because I think he’s most adorable, but I ended up with Kermit because I had a vision of him dragging the Kermit around by his leg, and that was too cute to pass up.”

I love it, and I do think the Pook-a-Looz are pretty adorable. And I do have great visions of my little niece-phew (thats a mixture of niece and nephew seeing as we won’t know the babies gender until it’s born) dragging around a little Muppet.

But let’s see our next answer, from the always wonderful Ryan Dosier:
“I, personally, love the Collect-a-Pal toys. They’re tiny, but not so tiny to be swallowed or stuck in ears or other orifices, cheap, and fun. They’re like little ball versions of the Sesame characters. They’re quite stylistic and not exactly accurate representations of the characters… but how can you not love them? And, also, I know it’s not really a toy… but you absolutely cannot beat The Monster at the End of This Book.”

Ha, I love those little guys. Might need to jump on the internet and buy some… For my niece-phew. And for me…

And a nice long answer from frequent contributor Michael Wermuth, Jr.:
“I don’t have any Sesame Street toys that have been produced in the past ten years, but I guess you can’t go wrong with Tickle Me Elmo or any variation. Or those anniversary plush that came out a few years ago. I’d also recommend the Sesame Street Beans that came out in 1998, the Magic Talking Kermit, the finger puppets from the 1970s and 1980s, and the die-cast Sesame Street vehicles which I think were released by Playschool in the 1980s. Of course you’ll probably have to try eBay or search flea markets and goodwill stores for those.

I think it’d be easier to pick out books and DVDs. You can’t go wrong with The Monster at the End of the Book, and there is a book called the Sesame Street Treasury, which combines many books from the show’s 40 year history (including How to Be a Grouch and The People in Your Neighborhood). When it comes to DVDs, I’d suggest Monster Hits, Silly Storytime, C is for Cookie Monster, Bert and Ernie’s Word Play, A Celebration of Me Grover, or any of the anniversary DVDs.”

Some great answers there.  I love every single one of these ideas, and I’ve actually seen the big Treasury book around, so I might have to get that and put it away for a couple of years time.

So there we have it, some fantastic answers from fantastic people.  And a lovely little way to wrap up my segment “?”

Yes  That is why this is a special edition, my friends, for it is, at least for the foreseeable future, my final edition of this segment. Why? Let me tell you. When I began this post with the question about Oscar’s can, that was the only thing I could think to ask. I managed to come up with a few questions, but the vast majority I came up with were easily answerable with a bit of looking. And truth be told, I’m out of questions. So, I’ve decided to end it. But thank you to everyone who ever submitted or helped get answers for me.

Thanks to Joe Hennes from ToughPigs for getting me in contact with Joe Mathieu. Thanks to Joe Mathieu who was kind enough to give me a detailed answer in my first edition, and has since been very kind to me.  Thanks to Katy Perry for wearing scantily clad clothing. Thanks to Corey Edwards, the hopefully director of The Fraggle Rock Movie. Thanks to Jim Lewis for an answer about Pepe, and then of course a huge thanks to Bill Barretta for an answer on the same question. Thanks to the people here who put in their answers about kids toys. Thanks to Beau for his comments. Thanks to Artie Esposito – he knows why. Thanks to Paul McGinnis. Thanks to Emilio Delgado, who had written an answer for an unpublished edition about Maria and Luis’ last names. Thanks to Matt Vogel – he didn’t do anything for my segment, but the man is still responsible for getting me on the Sesame Street set back in 2008. And, of course, thanks to Ryan Dosier, a man so filled with Muppet fan-ism that it makes me jealous.

BUT NEVER FEAR, for I’m not disappearing. Just this segment is disappearing. It took me 18 months to get a ‘Frequent Contributor’ credit, and I’m not losing it anytime soon. I will be back, in some type of other format, doing some other type of segment. I need to talk to Ryan about some ideas.

But, before I really end this thing, you may recall in my very first answer about Oscar that I saw an episode where he was wearing a garbage can lid as a hat, but I missed out on getting a photo…

Well, guess what I managed to catch on TV the other day? 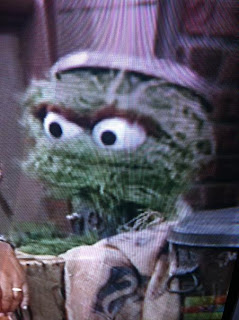 One thought on “"?" with Jarrod Fairclough: What is the Best Sesame Street Toy? ANSWER!”