Today’s article is written by Michael Wermuth, Jr. with edits and contributions by Ryan Dosier.

Family…
Waldorf has a wife named Astoria, who resembles Statler in a drag. Statler has mentioned having at least two wives in the past. Statler also has a grandson, who attended the show when Elke Sommers was the guest star.

WHO ARE STATLER AND WALDORF? 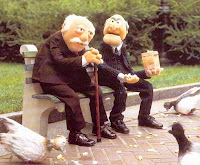 Statler and Waldorf are the two old men who regularly watch The Muppet Show from a small balcony, despite the fact that they usually hate the show. They often heckle all of the acts on the show, but their favorite target has always been Fozzie Bear and his comedy monologues. Despite this, they do occasionally like what they see on the show (particularly certain guest star performances). When they’re not complaining about the show, they’re making insults at each other (using such terms as “old fool”). Their old age has sometimes led to them forgetting or mishearing certain things, or even caused them to sleep during the show. The two are rarely seen without the other.

Outside of The Muppet Show, they have been involved with almost every big Muppet production, whether they are among the main group of Muppets or not. In the movies, they often just happen to be at a location that the other Muppets are at: such as in the park while the Muppets ride their bicycles, or sunbathing in New York City while Kermit walks by. On Muppets Tonight, they were often seen watching the show on television, initially from inside a nursing home, but later at a variety of locations such as a beach, a bar, and a ski resort. 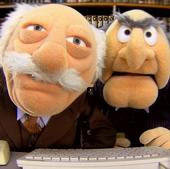 In 2005 they hosted their own web series, Statler and Waldorf: From the Balcony on Movies.com in which they reviewed recent movies. This series was fairly successful, but only lasted a year. More recently, they have appeared in every Muppet viral video, usually by giving their comments from at the computer at the end of the videos. A handful of viral videos were just them in front of their computer screen giving comments.

Statler: Well, Waldorf, they’ve finally made it to Broadway.
Waldorf: Yup, and I’ve got tickets.
Statler: You did? Are they good seats?
Waldorf: They sure are! They’re for the next train out of town!
~ The Muppets Take Manhattan

Though usually seen in their balcony, the duo has occasionally acted on-stage at the Muppet Theater. After complaining about their opening numbers, Kermit once let them put on their own opening number, “Take Ten Terriffic Girls.” Statler and Waldorf got the opportunity to host the show themselves when Hal Linden guest starred.

When Danny Kaye guest starred, the duo chose to sit outside the theater as opposed to watching the show, citing “Whats-his-name Kaye” as the worst performer on earth. However, as the show was about to end, they realized that they misheard who the guest star was: Manny Kaye, the tune clam player, and it turned out that Danny Kaye was actually one of their favorites, making them wish they had watched the show.

WHY DO THE MUPPETS NEED STATLER AND WALDORF?

It’s kind of hard to justify the Muppets needing Statler and Waldorf, per se, considering how much of a pain they can be. Yet I think it’s safe to say that Statler and Waldorf need the Muppets. What else would they do with their down time? Who would they heckle that wouldn’t eventually call PGOP (Prevention of Grumpy Old People)? The Muppets are so thrilled to just have someone in the audience that they’ll take the two old geezers no matter how awful they are to them. Yet Statler and Waldorf keep coming back… could it be that the two of them actually like the acts and they only heckle the Muppets to keep them on their toes and keep doing their best work?! …Nah.

Additionally, Statler and Waldorf represent the audience, especially those who may think the Muppets are weird. They represent old people. And they also give the Muppets a bit of conflict, though they aren’t really villains.

One thought on “Weekly Muppet Wednesdays: Statler and Waldorf”