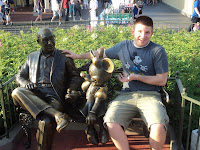 Ryan Dosier – Greetings, Muppet fans! I can’t tell you how disappointed I am to be back from Walt Disney World… I mean, do you realize how difficult it is to be at the Magic Kingdom one day and then sitting in Anthropology class the next? It’s no Zip-a-Dee-Do-Dah day, let me assure you. But you don’t really care about that, do you? No, you care about the Muppet presence at Walt Disney World–and who can blame you? With the new movie, The Muppets, coming out in 245 days one would obviously have to wonder what sort of Muppety things are happening at the largest Disney park in the world. Well… the answer will disappoint most but shock hardly no one. Let’s break it down by park, shall we?

EPCOT
The first day of my Disney journey began in EPCOT, where you can take a world tour and become a crash-test dummy all in one afternoon (unless the lines are brutally long, then it might last into the night). The Muppet presence was especially strong at the Experimental Prototype City of Tomorrow on March 13th because it just so happened that Steve Swanson of The MuppetCast was hanging around Orlando as well! Seriously people, we did not plan this! It was just a wonderful coincidence. Steve, as always, was great to hang out with. He bought two Muppet Vinylmations for us to open while being filmed on his handy-dandy Flip-Cam. Steve pulled out Sweetums (lucky dog) and I got Waldorf… so now I have to spend thirteen bucks to buy Statler on eBay–thanks a lot, Steve. (Seriously though, thanks!)

Anyway… other than that there wasn’t too much Muppet stuff to go around at EPCOT. I did buy a Kermit Kooky Pen which was $7 or something ridiculous like that… but I loved it and probably wouldn’t be a real Muppet fan if I didn’t buy it. (Even though I didn’t buy the three piece Kermit, Piggy, and Beaker pen set–in my defense, it was $21!) Other than that there were Muppet Vinylmation nearly everywhere they sold the addictive things. I was very pleased to see that, considering last year when I went they were sold out virtually everywhere so it’s nice to see that they were popular enough to warrant more production.

Oh, one more thing! I wore a Kermit t-shirt to EPCOT and I got quite a few comments from quite a few people (including a cute girl–*waggles eyebrows*) about how awesome they thought it was. People love that Frog! 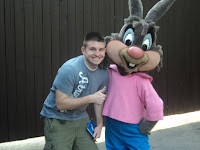 Much like last year there was hardly any Muppet merchandise at the Animal Kingdom park… which really didn’t surprise me. Vinylmation were present in a few Dinoland USA gift shops and I think I saw a Fozzie plush somewhere, but I’m not positive. So… in place of Muppet merchandise, enjoy this picture of me with Brer Rabbit!

The Magic Kingdom… my favorite place on earth. (Note: I haven’t been many places.) In between my trips through Space Mountain, my rollicking on Splash Mountain, and my waiting an hour to see Ariel (long story) (even longer line), I kept my eyes peeled for Muppety things and… well, same old, same old. They had the Kooky pens, the Vinylmation everywehere, and, my favorite, the Kermit Ears Hat (seen at right). Other than that there wasn’t much… a few plush dolls hidden in the corners here and there but not much else. I think the Muppets–and a lot of other Disney properties–were being overshadowed by the huge amount of Walt Disney World 40th Anniversary merchandise… cause there was a lot of it.

However, I did wear my Muppets walking down Abbey Road t-shirt to the Magic Kingdom and the response it got was epic. A girl came up to me and asked if she could take a picture of my shirt–just my shirt, a few Cast Members commented on it, and one working at an ice cream stand made sure that everyone else working in said stand saw how awesome the shirt was. They were all impressed that I got it at Target and not Hollywood Studios… and quite frankly so was I.

Ah, yes… the home of Muppet*Vision 3D, the place you are guaranteed to find at least some Muppet merchandise. But… how much? The answer… not much. Yes, once again I was incredibly disappointed with the haul at the Muppet*Vision gift shop… especially because it had essentially the exact same stuff it had last year. The only thing that I saw that was new this year was a Kermit mug that I forgot to go back and buy–and it wasn’t even that cool! They had a few t-shirts (read: five), Vinylmation, and the same old plush dolls they’ve always had.

This is once again a case of Disney holding off on the Muppet merchandise wave until their promotion for the movie begins, I think. I spoke to the cast members working the gift shop and they didn’t know much… but they were extremely hopeful and seemed to think that lots of merchandise was on the way with the movie promotion. I agree with them and certainly hope that’s factual.

But this was my first time seeing Muppet*Vision after the new Disney Digital 3D transfer and I must say… it was absolutely gorgeous. I’ve seen this film so many times and became accustomed to the slight graininess it had acquired over the years, but 20 years later after this brilliant refurbishment I am thrilled to say that the film looks like it was made this year. It’s gorgeous! Kermit and Fozzie never looked better. I just wish that they could do the same to the pre-show. It’s such a hilarious gem and it would be nice to see it get a bit of a touch up because it is definitely showing signs of aging.

Well… there you have it, Muppet fans. So there’s not much going on, Muppet-wise, at Walt Disney World at the moment… but I just know that as we get closer to the release date of the movie we’ll be seeing a flood of Muppets at the Parks. I just wish I could be there then. Ah, well. Also, I’ve been hearing that the second series of Muppet Vinylmation will be released on April 15th and that Dr. Teeth is confirmed to be included… so that gives us Janice, Floyd Pepper, Sam Eagle, and Dr. Teeth confirmed so far. I’ll keep you posted as I hear more!

Have a Magical Day, Muppet fans! 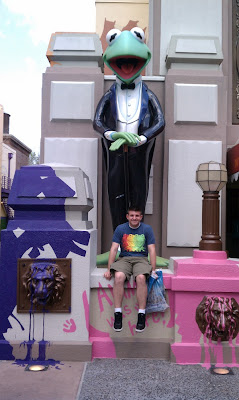