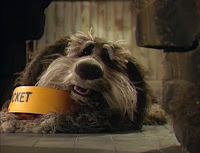 I don’t recall if I mentioned this back when I started my Almost Daily Fraggle Rock Quotations, but watching Fraggle Rock almost constantly is about all that’s been keeping me relatively sane this school year. I mention this now because as I sat down to watch this, I was having trouble finding the remote for the DVD player to start watching again after a full day of classes, and also because I have nothing else to talk about. We’re just sort of going to figure this post out as we go, alright? It should be fun.

As I was saying, Fraggle Rock has been an almost constant presence in my life since August. That was sort of interesting last semester, when I had no TV in my apartment and therefore could only watch the show on my computer, even if I was also writing a paper on that computer. Still, I played Fraggles almost constantly when I was in my apartment and awake, I started putting quotations on my chalkboard (now a white board), brought the DVDs with to watch at my friend’s apartment to properly indoctrinate her, and even named my new laptop Sprocket. I have to say, it makes interesting background noise when you’re reading about slavery, Ancient Greek mythology, and the history of book publishing in America. (And yes, those were all subjects of my assigned reading last semester.) 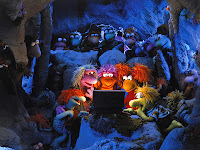 So just for a moment here, let’s examine why I’m so drawn to Fraggle Rock as my saving grace in the face of the emotional and academic drama that is my life lately.

I mean, there’s the obvious fact that it falls into the realm of my Obsessive Muppet Fandom, but it must be more than that, right? I mean, why Fraggle Rock and not my usual reprieve, Muppet Treasure Island? Yes, there is a lot more variety in the length of an entire series than there is in a single movie, but watching the same thing over and over has never fazed me before.

It could be the comedy. It could be the inspirational aspect that so often comes up in the show. It could even be the fact that by going to Fraggle Rock, it’s sort of like hiding under a rock, which sure sounds appealing sometimes. But I think it’s the specific brand of magic that is Fraggle Rock. It’s the hope that everything–everything–will be okay. Someday, we’ll all understand each other, and there will be world peace, and we’ll all sing and dance and eat radishes. It’s the idea that if I could just find the right hole in the wall, I’ll discover an entire world of little furry creatures who live on music and vegetables and don’t know what money is, where garbage is not a problem of waste management but a source of knowledge and odd riddles and the occasional snappy song-and-dance number. It’s the comfort and amusement in the idea that when the pipes start banging, it’s actually a catchy, rhythmical tapping involved in a daily water-producing ritual.

With Muppets, there is always the idea that people are basically good, and that somehow everything will work out, but I think Fraggle Rock is the purest embodiment of that. It shows how problems arise, and how we could so easily fix them if we would just sit down and talk about it–or sing about it, as the case may be. The world of the Fraggles, the Doozers, and the Gorgs may be simpler than ours, but it’s complex enough that we can believe in it, and since there is so much good in that world, surely we can find that good in our world, too. 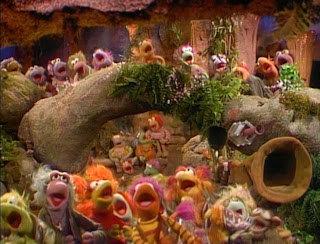