Lisa Alexander – Hello there, folks! Lisa the Intern here. As you’ve seen, Ryan is on vacation, which means I’m in charge for the week. He even sent me a cute little document called “How to Run the Muppet Mindset,” which I am keeping under lock and key in a concrete vault in the center of an underground labyrinth so that it will never fall into the hands of The British Correspondent. Which is actually why today’s post is a bit late… I got a little lost in that labyrinth, triggered a couple trip wires, strained my back trying to get through a nasty web of lasers… by the way, is that my flesh I smell burning? Ah, crap… Lemme find some water…

Right! There we go. Now the bad news is that unlike last year, Ryan’s Spring Break doesn’t line up with mine, so while he’s off gallivanting in Disney World, I am back at school trying to run this blog while I write ten-page papers and read post-modern theory and study for an Anthropology exam, which really wouldn’t be too much of a problem except that he didn’t leave me much in the way of posts to put up while he’s gone. So just bear with me here, alright?

For the record, I am not at all bitter about being stuck here at school in Cornfield Central, slaving away under a huge stack of textbooks, while Ryan has a grand ol’ time in the happiest place in the world filling his suitcase with all the Muppet merchandise known to mankind. …Well, not VERY bitter, I mean. Or at least not as bitter as I USUALLY am. I mean, the guy goes to Disney just about every single year, and with as long as we’ve known each other… I’m just used to it by now, right? …Yeah, not so much. More like I’m feeling tolerant because I get my own Disney trip at the end of May.

So as I mentioned, Ryan didn’t leave much for me to post, and since I have a huge paper due tomorrow that I haven’t really started yet, I don’t exactly have time to sit here and make something up on the spot. So instead, I will show you a piece of my fan art, which I figure I’ll display more fully later in the week unless I can think of something better.

But stay tuned, because we’ve got an interesting week ahead of us, starting with a fantastic announcement tomorrow!

In the meantime… I’m out. 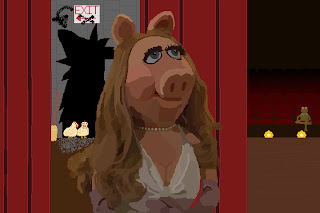 One thought on “Lisa the Intern Takes Command”