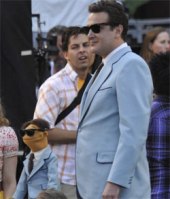 Guess what, Muppet fans! Walter–you know, Walter, the new Muppet for the upcoming The Muppets (what a confusing sentence)–finally has a voice! Yes, after weeks of debate and conflicting rumors, the brand new Muppet character and friend of Jason Segel’s officially has a voice. No, it’s not Michael Cera’s… and no, it’s not Paul Rudd’s… and no, it’s not Captain Caveman’s. Walter will be voiced and performed by Muppeteer Peter Linz (who is awesome). Linz performed Tutter in Bear in the Big Blue House and has worked for Sesame Street and The Muppets as a background performer for quite awhile.

Where does this information come from? Well, MTV recently conducted an interview with a Muppet fan’s best friend, Jason Segel, on the press junket for Gulliver’s Travels, which Jason is in. In the interview, Segel not only revealed that Walter will be voiced and performed by Peter Linz, but also that the movie is a full-on musical with “ten to twelve” songs written by Flight of the Conchords‘ Brett MacKenzie. Segel also mentioned that they are hoping to get Lady Gaga for the film, but that nothing has been confirmed as of yet.

However, on the positive cameo side, it was recently revealed that Dave Groehl (no relation to Dave Goelz), drummer for the band The Foo Fighters, will be making a cameo appearance in the movie as Animal’s replacement with Dr. Teeth and the Electric Mayhem while everyone’s favorite drummer is in anger management. Our good friends at ToughPigs have all the info if this wasn’t enough. (Don’t worry, you won’t hurt my feelings.)

So… in conclusion, Walter is Peter Linz and Peter Linz is awesome, the movie is a major musical with tons of musical numbers, and Dave Grohl plays the drums and will probably be great. Just three more reasons to love The Muppets (the movie with the confusing title… not the Muppets). 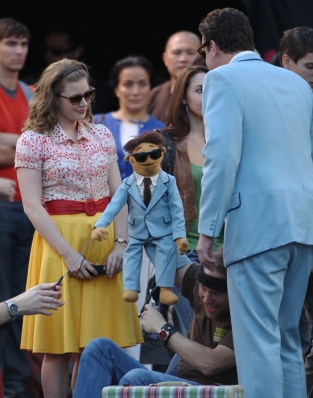