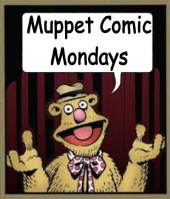 James Gannon – This week, as no Muppet comics graced the shelves, I’m gonna do things a little different. I found an interesting item, Star Comics Magazine #12, at a comic shop and picked it up a week ago. Baby Piggy is on the cover, riding a roller coaster with, ironically enough, Flintstones Kids own Freddie Flintstone. Star Comics was a kid-friendly imprint of Mavel Comics. While there were a few original characters like Top Dog, they specialized in licensed character comics, such as Muppet Babies and Fraggle Rock. This was, of course, long before the comic companies decided to just make kid-friendly comics with their own characters, dramatically saving on licensing fees. (Really? Baby Teen Titans?) In 1988, they just absorbed any surviving comics into the general Marvel banner. As this is a Muppet blog, I’m only going into detail about the reprinted Muppet Babies comic, but I’ll give a brief rundown of the others. There are several pretty good Heathcliffs (though I had them all from a Heathcliff Annual I bought years back), a fun early ALF comic (closer to the sitcom than later issues), two surprisingly readable Flintstone Kids comics, and a REALLY REALLY REALLY bad Madballs comic book/infomercial blend which was wall to wall unfunny puns, bad writing, generic characters, and illegible art.

The Muppet Babies comic in question is a reprint of the second story from issue #13, “Out of this World.” The babies are engaging in one of their classic pop culture satire imagination sessions, this time as a parody of Star Trek (completely inconsistent with the one from the show, mind you), and Captain Kermit vows to bring Princess Piggy to her home world. Their spaceship, which suspiciously looks like the Swinetrek and was apparently designed by Fozzie, runs completely on banana peels being slipped on by a robot, which keeps the engine laughing (HEY! I told you Fozzie designed it). Anyway, a “do not push” button is pushed, it jettisons its fuel supply and lands them on a crazy alien world. But, well, that’s to be expected, isn’t it? Anyway, they land on a wacky, comedy based planet called “Jokerville.” (Isn’t that suffix exclusively for cities, not planets?) After greeting them with Banana crème pies (not quite a Magrathean defense mechanism), Gonzo points out they have to have the banana peel fuel they need. So they experience giant chattering teeth, giant plastic snakes, growing squirt flowers, and pun after pun. Stuff you’d expect… Yadda yadda yadda twist ending?  Someone who looked exactly like Fozzie founded the planet. And Animal must be taking a nap, since he’s nowhere in the story.

The story is eh, the writing’s alright, seems like a fantasy sequence right out of the show, the character’s are more or less themselves (as themselves as these generic 80’s kiddy comics go). Bill Prady does a serviceable job, though Laura Hitchcock’s stories were stronger in the ones I’ve recently read. And it was virtually the only thing in the magazine NOT written by Michael Gallagher (he wrote a LOT of Star Comics, but mostly ALF and Heathcliff). What  REALLY stands out is Marie Severin’s artwork. The characters look, dare I say, BETTER than they did on television. Even when detail oriented Toei animated it (don’t get me started on Akom). Even the human inhabitants of Jokerville have a demented almost Muppety, but almost 50’s Mad Magazine look to them. Unfortunately, the 1980’s printing keeps it from shining. The old days of smudgy dots are thankfully long gone, but it really has a curious effect of bleeding and fading (while the paper gets waxy itself) on old comics. The last page of the ALF comic was almost impossible to read. Not to mention the smaller than a manga digest size doesn’t play kindly either, making it pretty hard on the eyes when reading. I almost wish BOOM! would reprint some of the best stories from the Muppet Babies Marvel run in a graphic novel, but with new smooth digital re-coloring so Marie’s artwork can shine. Of course, if I choose to review more Muppet Babies comics, I’ll go into greater details.