Since this is my first weekly Muppeteer post, I thought it was fitting that it be about the man behind the Muppets, the one, the only, Jim Henson. Jim grew up in Hyattsville, Maryland, a suburb near Washington D.C.

In 1955, Jim was offered his own local show on WRC-TV, an NBC affiliate. The result was Sam and Friends, a five-minute TV show airing twice a day after the news and starring some of the first Muppets. It was there that the world was not only introduced to an early, more lizard-like Kermit the Frog, but Jim met his future wife, Jane Nebel.

It was around this time that Jim began to use his Muppets in TV commercials for local companies, launching Muppets, Inc. One of these characters was Rowlf the Dog. Rowlf helped the Muppets get the attention of the nation, appearing on national TV shows like Today, The Jimmy Dean Show, and The Ed Sullivan Show. 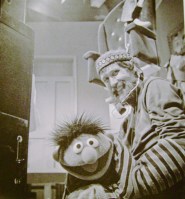 In 1969 the Children’s Television Workshop, now called Sesame Workshop, approached Jim about creating a children’s educational TV show featuring his Muppets. Jim was reluctant at first, as he didn’t want the Muppets to be known solely as children’s characters. However, he eventually agreed, and helped to create Sesame Street with the likes of Joan Ganz Cooney, Joe Raposo, and Jon Stone. On the show he preformed now well-known characters such as Kermit the Frog, Ernie, and Guy Smiley.

Jim, as mentioned earlier, didn’t want his characters to be typecast as children’s characters, and so he envisioned The Muppet Show, a half-hour TV show that quickly became one of the must successful television shows of all time. It was this show that introduced household names such as Fozzie Bear, Miss Piggy, and Gonzo. It was also this show that spawned a whole series of feature-length movies. These films introduced The Muppets to the outside world and a broader audience.

He also worked on several other projects, such as Fraggle Rock, The Dark Crystal and Labyrinth, fantasy films geared more towards adults, and The Jim Henson Hour, a new television show featuring some of the same characters from The Muppet Show with new characters in a new setting.

Unfortunately, in May 1990 it was discovered that Jim had a very rare bacterium called Group A streptococcus, that was discovered too late for treatment. He died at 1:21 a.m. on May 16, 1990.  His legacy still continues on though, with The Muppets, now owned by Disney, Sesame Street, under Sesame Workshop, and the efforts of The Jim Henson Company, which brings Jim’s vision to life every day with new projects and revitalizing old properties such as Fraggle rock, The Dark Crystal, and Labyrinth. The Jim Henson Legacy is also extremely influential in keeping the magic of Jim Henson alive with touring exhibits, special programs, and much more.

And with that, I dedicate this first Muppeteer post to the lovers, the dreamers, and you, Jim