Ladies and gentlemen, boys and girls, penguins of all ages… The Muppet Mindset has turned ONE YEAR OLD! Exactly one year ago today, Ryan Dosier (that’s me!) started this blog with the intention of giving Muppet fans all over the world a chance to make their voices heard. The Muppet Mindset became the only Muppet blog on the internet that actively pursued (and subsequently stalked) articles, reviews, and opinions of fans of the Frog, the Pig, the Bird, and the Fraggles. What followed was a truly (sort of) revolutionary amount of feedback from the Muppet world. Fans turned out to contribute to our cause, amazing Muppet fan-site administrators from the likes of ToughPigs.com and The MuppetCast provided more support than anyone could possibly imagine, and higher-ups from the various Muppet worlds turned out to be interviewed and sing the praises of The Muppet Mindset. Today, exactly 350 posts later, the little blog that could (or couldn’t, depending on your optimism level) is one year old. An entire year of spreading the GREAT news of Disney’s Muppet revolution. An entire year of celebrating 40 years of Sesame Street. An entire year of keeping our fingers crossed for a Fraggle renaissance. An entire year in which only 15 days did not have a new post. (I don’t believe it either!)

Today on our One Year Anniversary, some of the biggest names in the Muppet world have turned out to send birthday wishes to The Muppet Mindset. I am continually humbled and honored that such incredible, talented people (some of them my personal heroes) were kind enough to send their comments our way. Now, sit back, relax, and enjoy the comments of some of the greatest people out there! 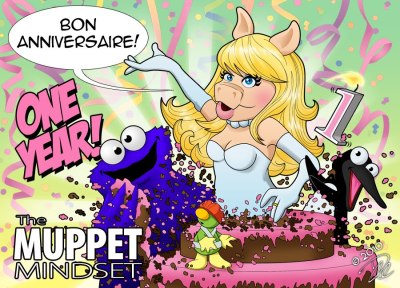 WHAT IS YOUR BIRTHDAY WISH FOR THE MUPPET MINDSET?

“I wish you many and more wonderful years of tracking The Muppet Mindset, capturing it, tagging it, and most important of all, releasing it back into the wild where it can continue to be fruitful and multiply like Koozbanians on a honeymoon. Long may you run!” ~ Jim Lewis, Muppet Writer
“More of the same! I love the in-depth look at specific characters – very insightful and thorough.” ~ Paul Rudolph, Sesame Street Musical Director
“My birthday wish for The Muppet Mindset is that all Muppet fans would up and move to the United Kingdom where The Muppet Show was originally filmed…and party hard. In the British way…with tea and little cakes and some quiet cricket.” ~ The British Correspondent, Cat-Stealing Brit
“Congrats on an amazing first year, Muppet Mindset!  Scooter himself couldn’t run a better website!” ~ Grace Randolph, Muppet Peter Pan Writer

“My birthday wish for the mindset is that it continues to age gracefully, like a beautiful Hollywood starlet and doesn’t succumb to those nasty, nasty viruses or become too wrinkly around the edges as so many websites do! In all seriousness, I would love to see it go from strength to strength. The past 12 months have been exceptional and hopefully this proves a fantastic springboard into bigger and better Muppety treats for all us lucky fans! You the guy, Ry!!!” ~ Stuart Reeves, Muppet Fan Artist

“My birthday wish is for you guys to stop doing such great work. The Muppet Mindset keeps upping the ante in terms of quality content, great interviews, and a big fan base. It’s making ToughPigs look bad! And I’m a lazy man at heart. So please, just cool it with all the great stuff so I can start sleeping in again.” ~ Joe Hennes, Owner/Operator of ToughPigs.com
“I hope The Muppet Mindset gets a shiny new bicycle for its birthday! Wait, no… Websites can’t ride bicycles. Well, then I hope the Muppet Mindset gets a huge, delicious slice of strawberry cheesecake!  Hmm… no, websites can’t eat either. Okay, I got it… I hope The Muppet Mindset, for its birthday, gets a talking porcupine! Yeah! That makes sense.” ~ Ryan Roe, Owner/Operator of ToughPigs.com
“Wishing for at least another 99 years of Muppety goodness to and from the Mindset! And then, a few days of silence in recognition for all the good penguins we lost in the war… then back to more happy times! Next year I’d like to see the Mindset Movie, about one man’s struggle to create awareness for organ donation, then after being struck by lightning, invents a machine to write witty blog posts… thus was born; THE MUPPET MINDSET! I’m pretty sure that’s how it happened in real life, right? Happy Birthday!” ~ Dave Hulteen, Jr., Muppet Fan-Artist
“My birthday wish? Cash, check or gift certificate are always good, okay. Gracias!” ~ Pepe the King Prawn, via Bill Barretta
“I wish for you your VERY OWN MUPPET: ‘Marty the Mindset Marmoset.’  Marty would be a shaggy beatnik monkey with his own bongo drums. He would do his own blog for the website which would always end with ‘And that’s how the “Marmo” sets. Peace out!’ I’ll get on the horn with the Creature Shop and see if they can get to work.” ~ Cory Edwards, Writer/Director of Fraggle Rock: The Movie
“My wish is that the new Muppet film launches the Muppets back into the spotlight where they deserve to be and that leads to more films, a relaunched Muppet Show (Where I will one day be a musical guest) and of course, all of this will lead to wider and greater attention paid to the Muppet Mindset! ;)” ~ Jesse Blaze Snider, Writer Muppet Snow White
“I wish for The Muppet Mindset to be around for many, many years. Disney is about to launch The Muppets again in a big way and we will need a genuine place to follow along. To me everything about The Muppets and  their legacy is about the fans! There is no passion like that of the Muppet fans!” ~ Louis Henry Mitchell, Associate Design Director of Special Projects for Sesame Street
“My birthday wish for The Muppet Mindset is to learn a foreign language. I know it doesn’t seem like it would be of any use right now, but someday, you may want to travel or work abroad.” ~ Matt Vogel, Sesame Street and Muppet Muppeteer; Floyd Pepper, Robin the Frog, Big Bird


“Where do I see the Mindset in a year? Well, that depends. If all goes well, we’ll have run out of Muppet-related people to interview (although we may not have actually heard back from all of them), we’ll be reporting all the fantastic Muppet news coming our way, and I (as a recent college graduate in desperate need of a job) will be successfully persuading you to start paying me for my services. If all does NOT go well, we won’t hear back from anyone we try to interview, The British Correspondent will take over, we will somehow miss all of the fantastic Muppet news, and I’ll be obnoxiously begging for a paycheck in a most unsuccessful manner. Either way, I’ll still be nagging you about comma splices.” ~ Lisa Alexander, the Nagging, Unpaid Intern 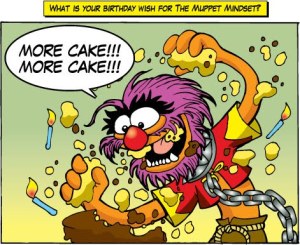 WHERE DO YOU THINK THE MUPPET MINDSET WILL BE IN ONE YEAR?
“I don’t think it is unreasonable to consider Muppet Mindset World Domination by the end of next year. Dream big, right? And short of that, I hope and expect there will be much to consider, ponder and share as the coming year unfolds…so that by the time of your second anniversary, you will be hailed rightfully as a believer in Muppets long before it was so insanely fashionable. At which point, I hope, you’ll still take my calls.” ~ Jim Lewis, Muppet Writer
“Hopefully technology will allow a Muppet Mindset chip in our brains so we can access our favorite Muppet information at all times!” ~ Paul Rudolph, Sesame Street Musical Director
“Wherever it is in another year, it better get a move on as that’s the last year before 2012 when the Mindset will be rebooted along with the rest of us (minus John Cusack) in a massive tidal wave.” ~ The British Correspondent, House-Wrecking Brit

“On the internet…is this a trick question???” ~ Stuart Reeves, Muppet Fan Artist

“In one year, I predict you will be in Kermit’s Top Five on his wireless plan.” ~ Grace Randolph, Muppet Peter Pan Writer
“Hopefully working out of something more appealing than the family garage.  HAPPY BIRTHDAY!!” ~ Fran Brill, Sesame Street Muppeteer; Zoe and Prairie Dawn
“In another year, The Muppet Mindset will be everywhere, thanks to the enormous success of MTV’s new Muppet Mindset reality show, in which cameras follow Ryan Dosier 24-7 and capture the intense drama of running a Muppet website. The most talked-about scenes will include Ryan watching Fraggle Rock, Ryan reading an issue of The Muppet Show Comic Book, and Ryan staring at his computer screen for an hour trying to come up with a reason ‘Why the Muppets need Annie Sue Pig.’  Before long, college kids all over the country will be starting their own Muppet fan sites in the hopes of landing a show of their own, but most of them will fail because most college kids have no idea who the Muppets are.” ~ Ryan Roe, Owner/Operator of ToughPigs.com
“I think…they will be broke if they keep sending people monies for their birthdays, okay.” ~ Pepe the King Prawn, via Bill Barretta
“I bet you will land many more big interviews with Muppet titans… much larger than me. I am also hoping for an on set visit for you — maybe on Sesame Street, maybe on a new Muppet movie! The way things are going, it will probably be with Kermit and friends before the Fraggles roll film. Happy birthday, Muppet Mindset. Always keep your MIND set on MUPPETS.” ~ Cory Edwards, Writer/Director of Fraggle Rock: The Movie
“Boffo. ‘Nuff said. ;)” ~ Jesse Blaze Snider, Writer Muppet Snow White
“I think The Muppet Mindset will excel and bring much pleasure to those who subscribe. I fully recommend to all to make this the source of the deeper Muppet information and i will do all I can to assist in bringing my “inner sanctum” access to The Muppet Mindset. In the second year I hope to do another interview and share some amazing new stories- one in particular about Kermit the Frog that was a life changing experience for me. Congratulations and THANK YOU to The Muppet Mindset!!!

“In another year, I see The Muppet Mindset expanding in the puppet universe to host sister sites like the Krofft Puppet Psyche, the Lambchop FanShop and the Edgar Bergen and Charlie McCarthy McMentality.” ~ Matt Vogel, Sesame Street and Muppet Muppeteer; Floyd Pepper, Robin the Frog, Big Bird

“As for my birthday wish for The Muppet Mindset… a salary would be nice. (Oh wait—that’s still for me. Um… Well, how about a new pumpkin knife?)” ~ Lisa Alexander, the Unpaid, Unscrupulous Intern 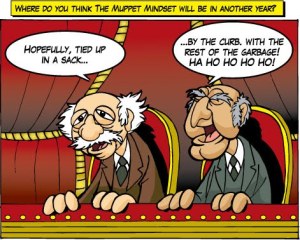 I’d just like to extend another HUGE thank you to everyone who contributed to our Anniversary celebration. You’re all the greatest and I owe you all more than you know! The Muppet Mindset is always here for you if you need anything at all. Thank you, thank you, thank you!