Hey folks! Lisa the Intern here again with part two of my series on the Muppet Treasure Island computer game. If you recall, we left off with the opening credits.
The Epic CD-ROM Family Adventure: Part 2

Lisa Alexander – Once the credits are over, you find yourself standing in the Benbow Inn. There are two tables right next to each other, and Billy Bones is sitting at one of them with Gonzo and Rizzo behind the other. “And no one knows to this day what happened to the treasure, or the treasure map,” Billy says to your sidekicks. (By the way, Billy Bones is still played by Billy Connolly. How cool is that?) Then he turns to you and says, “Maybe you’ll find ‘em. Eh, Hawkins? …Hawkins?” Apparently incredibly entertained that no matter how loudly you answer, he’ll never hear you, Billy bursts into laughter. It’s about at this point that we start hearing some nice instrumental background music strongly reminiscent of “Something Better.”
“Tell us another story, Mr. Bones. My favorite’s the one about the one-legged man!” Gonzo says.
“Oh… the one-legged MAN! I told ye never to mention that cursed beast. Now get back there and finish brewin’ me stew. I feel the horrors comin’ on. Be GOIN’!”
“The horrors—oh, I think I’ll be goin’ now,” Rizzo says to you, and he shudders as follows Gonzo into the kitchen. We hear Gonzo’s distant laughter as dishes clank around in the kitchen, which apparently makes Billy angry, because he stands up and storms into the kitchen.
There’s a drastic change in music as the top half of the door opens and Blind Pew walks past, waving his stick around. We can see him through the door and the window as he says, “Ah! Billy Bones, it’s ME! Blind PEW! Come to settle a SCORE!” Then he laughs as he leaves our sight, but we do hear him crash into something.
Once Pew is gone, the top half of the door magically closes again, and Billy trudges out of the kitchen and up the stairs, adjusting something in his pocket. When he’s well out of sight and the music has stopped, we hear him shout (in a manner far less dramatic and drawn-out than in the movie), “THE BLACK SPOT! NO!”
Then Stevenson appears on the railing on the second floor, and we can finally start to actually play. 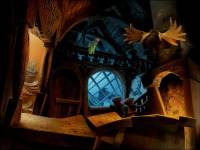 Some sound effects set the mood. We can hear the fire crackling in the fireplace—a fire we can catch a tiny glimpse of behind a table if nothing else is happening on screen. Once in a while, we hear thunder outside, or multiple men laughing, or Blind Pew laughing, or some dishes being handled in the kitchen. Every thirty seconds or so, a pirate from the movie will walk past the window, each accompanied by a different piece of music with varying levels of creepiness. You may see Mad Monty, Clueless Morgan, Angel Marie, or Spotted Dick. If one of them is walking past—or, really, when anything is happening on screen during the game—your cursor disappears until it’s over, meaning you can’t do anything, which is a little annoying sometimes.
At any point in the game, if you move your cursor to the top-left corner of the screen, it will change into a musical note. (A sixteenth note, to be exact.) Click, and you will get music until the next time you click somewhere else. Here, it’s an abridged instrumental of “Shiver My Timbers,” and it also stops the pirates from wandering by every thirty seconds.
But now that we’re free to use our mouse, what do we do with it? Well, there are all sorts of things we can click. The lamest one is to click on the stack of dishes we can see in the kitchen, which briefly shifts and makes some dish-noises. Slightly less-lame is to click on the fireplace, which creates an entirely pointless but nifty-looking puff of smoke. The rest of the things you can click are much more fun. 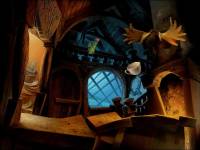 One of my personal favorites as a kid was to click the sign above the kitchen, which reads “Benbow Inn 1875.” When you click on it, a dish comes flying across the screen with a neat whooshing noise, and as soon as it’s out of sight, you hear it crash into smithereens. Your dish may be a bowl, plate, or cup, and may fly at varying heights.
You can also click on the kitchen doorpost to hear Rizzo raiding the kitchen. His comments are on random, so they’re not always consistent. You can hear “Where’s the food? No leftovers leftover!” and then hear “Ooh, cheese! And it turned all brown and yummy!” You can also hear him worry, “Geez, the refrigerator’s almost empty” before you hear him contentedly sigh, “Mmm! So much food, so little time.”
If you click on the table closest to the kitchen, a variety of things can happen. One, a random pig can come out and snootily say, “With those tall tales of his, Billy is a bigger ham than we are! Hm!” before he trots back into the kitchen with his snout in the air. Two, a different random pig can come out and chuckle, “Huh! Buried treasure… Ah, don’t believe ol’ Billy. I’ll tell ya, the whole matter’s hogwash—uh, if you’ll pardon the expression.” He laughs before he goes back into the kitchen. (I have no idea why Hawkins—or anyone, for that matter—is allowing all these customers into the kitchen.) Three, Gonzo and Rizzo poke their heads out and stare up towards the stairs. “Looks like Mr. Bones is checked out for the evening,” Rizzo says, to which Gonzo answers, “Boy, y’know he hardly ever sleeps in his room anymore!” Rizzo chuckles as they tuck themselves back into the kitchen.

Or four, and the best if you ask me, a tourist rat couple you may recognize from the movie come out in front of the table. (Everyone else was behind it.) In the movie, they briefly danced in front of the Electric Mayhem on the Hispaniola and later commented on the show and the food during Boom Sha-ka-la-ka. Their names are apparently Donna and Randy, and they’re already decked out in Hawaiian shirts and leis as they sing, “There’s gotta be somethin’ bettah… somethin’ bettah!”
“Yeah—there’s gotta be somethin’ bettah than this place,” Randy says.
“Maybe we’ll find it on our vacation! Bristol, here we come!” Donna says excitedly. “Did you remember the traveler’s checks?”
As their back-up music suddenly turns tropical, Randy says, “Don’t leave this place, without ‘em!” They laugh as they trot off to the right.
If you click on the window that pirates keep passing, the top of the door magically opens itself and Blind Pew creeps past with his creepy music. (He really creeped me out when I was a kid, so all this creeping that’s hilarious now was really nerve-wracking back then.) He might repeat what he said earlier about settling a score, or he might call, “Billy Bones! It’s your old pal, come to see you! HA! See you! Zat’s a joke! I cannot see!” He laughs particularly hard before leaving our sight and crashing into something outside. Or he might say, “Mm… I know you’re in zere, Billy… I can smell your breath, way out here!” And then of course he laughs, and we hear him crash into something outside.

Since clicking on the window puts us right next to the door, I will mention that putting your cursor over the door makes the cursor into an arrow pointing out and makes a green EXIT sign light up above the door. Yes, you can go outside, but I’m playing this in the longest way possible to show you all the intricacies of the game, so we’ll get there later.
Another click-option is the moose head above the fireplace. Oh yes, he’s the same moose head from the movie, and he’s another one of my favorites. Now, he can be a remarkably lame click that only results in him looking around. Or he can be funny and sneeze. Or, he can pull out a lovely British accent and deliver one of the following three gems:
“Hmm, let’s see… Rats… Geeks… Scurvy pirates… Yup! Just another ORDINARY night at the BENBOW Inn!”
“You know, my brother’s on the wall of the HARVARD club! Hm… Mom always said he had a head for school.”
“You’re expecting Bullwinkle?”
I have no idea who performed him for the game and gave him that lovely voice and accent, but I have missed the moose head.
And I’ve missed Stevenson even more, so let’s click on him. On most screens, he has multiple things to say. When he runs out of things to say, he gives a quick “AND I repeat” before appearing on screen to talk. My intention is to give you as much of Stevenson’s dialogue as possible, because he’s just too wonderful a character to remain unknown.
The first time we click him, he says: “Follow Billy, okay? Why? Treasure Island? Buried treasure? A treasure MAP? Get the connection? There WILL be a quiz!” And he makes a cute little parrot noise before he goes.
The second time, he says: “A better idea. You want a better idea? Well I say: Follow the pirate!” That last line is delivered in an exciting whisper and punctuated once more with a parrot noise.
That’s all he has to say here, and since we are playing in the longest way possible, we’ll listen to him. When we roll our cursor over the stairs or ceiling, it turns into an up arrow. Click, and upstairs we go.
Can you tell that this is going to be a very long series?

One thought on “The Epic CD-ROM Family Adventure: Part 2”