As you’ll recall, last week Floyd and Animal appeared at The Webby Awards ceremony to accept the Muppets’ Webby Award for “Bohemian Rhapsody.” Well, almost a week later, the band OK Go has put up a new video on their YouTube account featuring both Animal and Floyd as Animal has a staring contest with OK Go’s drummer, Dan. The video that follows is hysterical. Don’t believe me? See for yourself!

Lucky Dan… gets to be The Electric Mayhem’s road manager for a year… ‘Course, when’s the last time they had a gig, man? Mm… might just end up bein’ the one to feed Animal, ya dig? 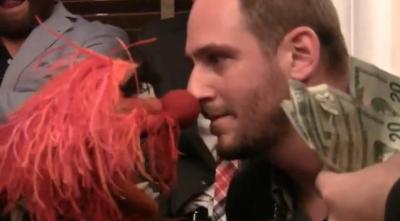