Ryan Dosier – After I finished my second viewing of Disney/Pixar’s Toy Story 3 last night (technically now, but since this is being posted tomorrow I’ll write in the past tense) and for one glorious moment before I got up to leave the theater, I just sat and watched the credits roll. I was, literally, stunned by the magic of the movies. Not just any movie, mind you, but the eleventh nearly perfect film to go up on Pixar’s distinguished mantle.

What is an article like this doing on a Muppet blog? Well… I’m not going to lie to you, dear readers, I really just wanted to write my own review of the greatest movie this year. But I promise I’ll tie it back to the Muppets before the final period is typed!

Now as I’m sure you all know, the Toy Story franchise is what started off Pixar’s reign as the most successful animated film producers in Hollywood. In 1995, Toy Story dazzled audiences with its stunning new technology, its captivating story, and its hilarious, distinctly human characters. In 1999, Toy Story 2 took that formula and made it twice as effective. Here we are in 2010, and I’m thrilled to say that Toy Story 3 has done the same thing and taken it to infinity and beyond. (C’mon… I had to.)

Each film follows the tale of child’s play-things Woody (Tom Hanks), Buzz Lightyear (Tim Allen), and a myriad of other fantastic characters including cowgirl Jessie (Joan Cusack), neurotic dinosaur Rex (Wallace Shawn), Hamm the piggybank, Slinky Dog, and the Potatoheads (Mr. and Mrs.). In every film Woody and Buzz learn something about their existence as toys and what that entails for their lots in life. Toy Story 3 is no exception. In the third installment, the toy’s owner, Andy, has matured and grown and is heading to college. The toys, after having no playtime with Andy for years, make a desperate attempt to be loved again and end up being donated to Sunnyside Daycare.

At Sunnyside everything seems peachy-keen, until the toys come to the quick realization that the daycare is more a prison than the Shangri-La they had hoped. The story soon morphs into a prison escape film rivaling any that I’ve ever seen. But Toy Story 3 is so much more than just an escape, and it proves that within the final half-hour of the film. I’ve never seen a movie capture such depth and poignancy, while still retaining humor and heart, like Toy Story 3. Its nearly impossible to not have tears welling in your eyes by the time the credits roll. Even upon my second viewing when I knew what would happen, the tears still came.

The Muppets have the ability to be just as emotionally heart-warming and tear-forming as Woody and Buzz; The Muppets Studio just needs to realize it. The reason that Toy Story 3 is such an amazing film is because its story focuses on its established, hilarious, adored characters. Sound familiar? I firmly believe that Kermit and the gang can carry the emotional weight that every Pixar movie has, while still retaining the classic humor and wit they’re famous for.

It is more than obvious that creating character-driven films like the Toy Story series is a venture that is just as successful, if not more so, than pandering to an audience that craves toilet humor and pop music backing tracks. A firm focus on the characters is exactly what the Muppets need. Kermit needs to drive his story by chasing his dream of singing and dancing and making people happy, just as Woody drives his story by chasing his dream of being just what Andy wants and needs.

I hope beyond all hope that The Muppets Studio team sends Jason Segel and Nick Stoller’s new Muppet movie script through Pixar’s writing department. Pixar knows exactly how to create a beautiful (and, as Dr. Teeth would say, profitable) character-driven film. That is exactly what the Muppets need with this new movie–character and heart; and nobody does that better than Pixar.

Do I have enough confidence that Segel and Stoller can write a heart-warming, character driven script on their own, without Pixar’s input? Yes, probably. But do I think their chances are infinitely better if they do get input from Pixar? Absolutely. Even though filming for the new movie is slated for September, I still believe that there’s plenty of time for the script to circulate through Pixar’s writing department, and I sincerely hope that it does.

If Toy Story 3 (which has set a record for animation by making over $41 million on its opening day) is any indication, Pixar knows exactly how to make a movie for all ages that is both hilarious and heart-warming. The key is character, and that’s what the Muppets need to focus on once again.

So, in conclusion… Go see Toy Story 3 and witness the best movie of the year and find out exactly what a kind of film the Muppets could be making if they focused on character once again. 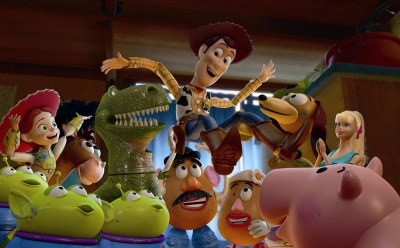 5 thoughts on “What The Muppets Studio Can Learn from Pixar (or: A Shaky Reason for Me to Toy Story 3 Review)”