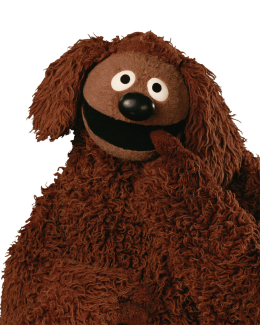 Famous quote…
“It’s not often you see a guy so green have the blues that bad.”

WHO IS ROWLF THE DOG?
This pooch is a punster and a pianist. Usually found tickling the ivories, Rowlf also had a noteworthy run in the operating room, which probably wasn’t great for his patients but was certainly wonderful for the rest of us. 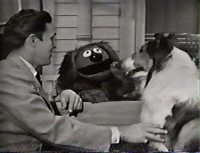 Rowlf was built for the Purina Dog Chow commercials in 1962, but his big break really came with The Jimmy Dean Show, where he was Jimmy Dean’s sidekick from 1963 to 1966 and ended up getting more fan-mail than Jimmy Dean did. (Poor Jimmy.) He went on to take part in several Muppet projects, most notably hosting the 1968 special Muppets on Puppets and explaining Sesame Street to Kermit in the pitch reel. 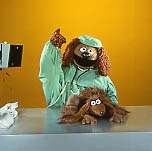 When The Muppet Show came along, Rowlf grabbed his piano and performed some classical numbers and sang solos and duets. He also helped out in the pit orchestra, which came in handy when The Electric Mayhem quit in episode 123. He was a regular in the At the Dance segments, but most of his punning went towards his role as Dr. Bob in Veterinarian’s Hospital alongside Nurse Janice and Nurse Piggy.

Rowlf is known for his punning and piano-playing, and his character performances are no surprise from a Muppet, but this pooch is also a poet. He wrote and read two poems in the first season of The Muppet Show: “Silence” and “The Butterfly.” Both poems are lovely, but neither reading went very well, so after the first season he stuck with his stronger suits. (Suits? He’s usually naked.)

Rowlf has appeared in every Muppet movie to date. From prominent roles in The Muppet Movie and The Muppets Take Manhattan to silent cameos in The Muppet Christmas Carol and Muppets From Space, Rowlf has always been a presence in the film careers of the Muppets.

Since Jim Henson’s death, Rowlf has slowly started to be worked back into the Muppet family. He recently appeared and starred in two of the Muppet viral videos on YouTube: “Rolling with the Skateboarding Dog” and “The Skateboarding Dog Gets Served.” Rowlf appeared, singing and playing the piano, in A Muppets Christmas: Letters to Santa, and also appeared prominently in “Bohemian Rhapsody.” 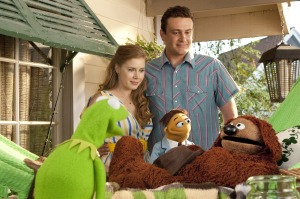 Rowlf played a big secondary role in The Muppets (2011), acting as both piano player, friend, and member of the Muppet Barbershop Quartet. After the Muppets split up, it was revealed that Rowlf was simply lounging at home in a hammock (as he said, “Classic.”). In Muppets Most Wanted (2014), Rowlf again played a secondary role, with many quips and singing lines in both “We’re Doing a Sequel” and “Something So Right.”

Rowlf’s most recently revealed role in the Muppet family came with “Fozzie’s Story” in the Muppet Comic Books. Confirming the suspicions of many a fan-writer, we see Fozzie go to Rowlf to talk his problems out. At the end of the scene, when Fozzie feels much better and is off to improve his act (again), Rowlf tells us that he says the same thing to everyone, implying that everyone comes to him for help. Seems like this is about the closest most Muppets will ever get to psychological help. Good luck, Dr. Bob.

ROWLF THE DOG AND JIM HENSON

While most people associate Jim most closely with Kermit, many sources have said that Jim’s personality was actually more like Rowlf’s; laid-back and down-to-earth. After all, the stories say that Jim never raised his voice, and Kermit sure raises his voice a lot more than Rowlf.

ROWLF THE DOG SONGS
Rowlf has performed numerous songs over the years. The following are some of his more famous ones:

But you would be wrong. 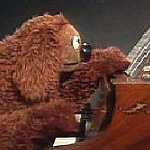 While Rowlf and Dr. Teeth are both piano-playing Muppets originally performed by Jim Henson and later performed by Bill Barretta, and while they have almost identical voices, that’s about where their similarities end. Could you really imagine Dr. Teeth sitting down to play Mozart’s “Moonlight Sonata” or singing a tribute to Beethoven? Would he willingly accompany Miss Piggy for “The Boy I Love is Up in the Gallery” and encourage the audience to sing along? Somehow, I can’t quite picture that.

Rowlf provides a certain classiness with his piano that most Muppets are, quite frankly, incapable of. He appreciates the classics enough to remind us of our musical roots a little, but he’s relaxed and easy-going enough that we don’t feel like we’re being force-fed “culture” a la Sam the American Eagle.

And Rowlf has a certain wisdom to him. He’s been around longer than the vast majority of characters we still see today, and while Kermit has been frantically trying to maintain order in this chaos, Rowlf has been sitting back to watch, listen, appreciate, and pun. With that wisdom, he’s the only character who can really take the emotional role of an older brother to Kermit. Rowlf has seen it all and heard it all without causing it all, so when Kermit (or anyone else) needs some advice, Rowlf is a good dog to call on.

Rowlf is definitely one of the safest Muppets to hang out with. Oh, he contributes to the craziness, too, but there’s nothing incredibly over-the-top about him. He’s unlikely to inflict pain on himself or anyone else, he’s got a good self-esteem without having a big ego, and when all else fails he can use the piano as a shield from flying projectiles. In short, Rowlf is a remarkably calm spot to balance the chaos of the Muppets. 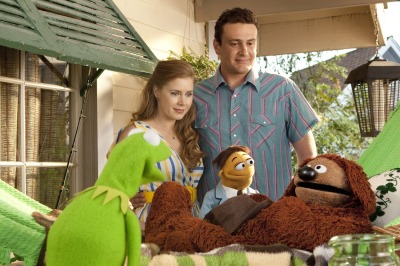