Famous quote…
“I just knew I’d catch up with you guys!”

Sweetums is the somewhat-gentle giant of the Muppets. He is a large, hairy beast who seems to have a bigger heart than his outward appearance would let on. He has proven on more than one occasion that he is more of a friend to the Muppets than a figure to fear. A perfect example of this is his friendship with Robin the Frog. The two are often seen as a duo (since their performance of “Two Lost Souls” on The Muppet Show) even though they are incredibly different.

Sweetums isn’t without his rough streak, however. He was involved in many sketches on The Muppet Show where he played the angry monster with guest stars such as Ruth Buzzi and Teresa Brewer. More often than not, however, Sweetums is helpful and rather kind, not angry and frightening.

The hulking monster has appeared in each of the Muppet movies except The Muppets Take Manhattan and The Muppet Christmas Carol. His most famous role in a feature film is probably in The Muppet Movie where he chases Kermit and the gang after they neglect to take him with them to Hollywood. The lucky monster gets to have a run-in with scantily clad beauty pageant girls, however, so it wasn’t a total loss.

In Muppet Treasure Island, Sweetums was a pirate on the side of Long John Silver, until he later reformed his ways and turned over to the good side of Kermit/Captain Smollet saying, “Are you kiddin’? I love you guys!” 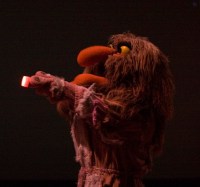 Another of Sweetums’ more famous appearances comes in Muppet*Vision 3D at the Disney Parks. In the 3D show, Sweetums appears both on and off-screen, employing the use of a paddleball for a “cheap 3D trick” and appearing live searching for Bean Bunny and dousing the penguin orchestra with a bucket of water.

Sweetums continues to be a fan-favorite character and has consistently appeared in most of the major new Muppet productions such as A Muppets Christmas: Letters to Santa and the Give a Day. Get a Disney Day. promotions. Sweetums also played supporting roles in The Muppets (2011) and Muppets Most Wanted (2014).

Sweetums was one of the only full-body Muppet characters performed by Richard Hunt, and undoubtedly one of Richard’s more popular characters. One of the most iconic photos of Richard is of him reading a newspaper while wearing the legs of Sweetums backstage on the set of The Muppet Show.

WHY DO THE MUPPETS NEED SWEETUMS?
Sweetums is a core part of the Muppet cast because he towers over them so much. He is truly a giant in the group and he adds to the fun of the character variation. Sweetums is also one of the few Muppet Monsters remaining in Muppet projects and those are key to any Muppet production.

Sweetums deserves the fame and fan-favorite status he has received because he is such a fun character. He looks scary on the outside but is really a kind monster. The Muppets need Sweetums because he can do heavy lifting, a tap number, and chase a car, but at the end of the day he’ll always be loyal and friendly.