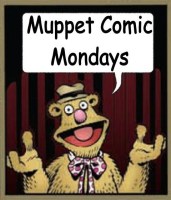 Before we get started with the regularly scheduled comic book review, I have to point out something. Yesterday, our good friends at ToughPigs posted five page previews for both The Muppet Show Comic Book #5 and Muppet King Arthur #4.

\I would like to direct your attention to page 5 of the Muppet King Arthur preview. First frame. Lower right corner. See it? YES! It’s Angus McGonagle the Argyle Gargoyle who Gargles Gershwin! As fans of the blog are well aware, Angus has become a sort of mascot for our interviews with Muppet comic artists and writers. Our good friend, the extremely talented James Silvani answered the call (which was a muffled gargle) and brought Angus to life in glorious 2D!

So anyway… James Silvani is awesome! He asked me to tell my readers to “pick up the issue on Wednesday and all of your gargling gargoyle dreams will be answered.” Also, be sure to check out James’ upcoming Darkwing Duck comic series, which is released in June from BOOM! Studios, as well!


We now return you to your regularly scheduled Muppet Comic Mondays article.

James Gannon – What a time to live in. Not only do we get a regular Muppet Show based comic (as well as 4 issue literary miniseries sides), but now we even have a Fraggle Rock comic as well. 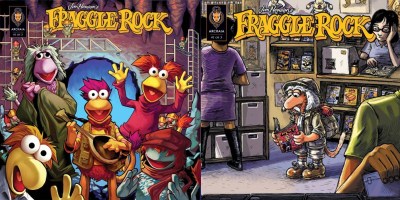 There is a difference, though. While the Muppets have had comics, a comic strip, 2 hard bound storybook type comics, and a recurring series of parody comics in Muppet Magazine, they never had a real regular comic book series until now (I, of course, don’t count The Muppets Take Manhattan movie adaption, and Muppet Babies is something different entirely). The Fraggles have. An 8 issue Marvel comic series was printed in 1985. However, the writing was so lacking that they apparently decided to stick to the worst thing about outside media based comics… the dreaded adaptations of TV episodes. Not terrible for people without HBO who didn’t see the series, but a bother to people who have. For the record, I say Marie Severin’s artwork was leaps and bounds better than the writing. I’d actually compare the two, but there’s no contest. 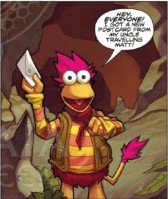 Archaia Comics, the company behind the 2010 series of Fraggle comics, have brought their A game and made an ACTUAL comic featuring ACTUAL original stories. While Boom’s Muppet lineup features different artists and writers for its back up literary series (and the occasional “guest artists” for the main series), Fraggle Rock has several different writers and artists in a single issue. This is something I actually prefer in a comic based on outside media because you get to see different artistic interpretations of the characters. And what a variation we get. Jeff Stokely’s semi-realism that really gets the puppet look down (though, it seems a bit stiff in some places, especially when he is capable of some great movement and expression. I especially like his interpretation of the Trash Heap), Katie Cook’s cartoonification of the characters, giving them a nice flow of cartoony movement, and the woodcut like style of Jeffrey Brown. They all fit very nicely and none seem to be out of place for the writing as each compliment their stories nicely. Indeed, Katie and Jeffery wrote and illustrated their own stories here.

As for those stories, this is presented in an anthology style format. One longer story, two shorter ones. First up, Gobo gets dared by Red to spend one night out in the Gorg’s garden, after she loses it when Gobo brings up his uncle’s exploration. In the first short story, Red invents a new game when silly creature technology falls into the Rock (dropped by Junior Gorg, of course). The second short features Red quite literally struck by inspiration, and (with Cotterpin’s help) invents a device that will change the way Fraggles live (at least, to her). This really seems to be an issue that focuses on Red, so I’d say that subsequent issues might also focus on one character. Either that or the writers get that Red is the most outspoken and proactive of the group. The writing here is very true to character (very important in these sort of comics), even managing to sneak in Gobo’s Canadian “eh” in the first story. And you’ll see quite a few favorites in these stories.  Marjory (complete with Philo and Gunge) and Cotterpin, you can also expect Sprocket.  But even Large Marvin gets a small speaking role. 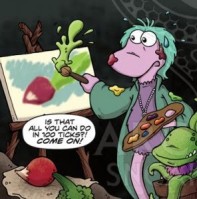 Unlike The Muppet Show Comic Book, this doesn’t so much give the feel that you’re watching an episode of Fraggle Rock so much as you get the feel that you’re seeing smaller, more candid moments of the characters.  It doesn’t need all the same segments and structure that the show did to make it great, and there’s no attempt at trying to get musical number in. But the stories themselves FEEL like they’re right out of the show (sans the Doc framing devices and Uncle Matt’s Postcards), I can’t really remember Red being an inventor, but it works so well here I didn’t even notice.

Even the odd 8 x 8 shape (think those larger paperback Golden Books) gives the comics a nice feel. Though, as a comic book collector, it’s a pain in the neck to find something to protect it. The paper stock is very high quality too. It’s much sturdier than the average comic, and when you have something as kid friendly as this, that’s important. There’s even a better use of the inside covers than the Muppet comics; instead of just reusing art from the inside of the book, the inside back has a nice little activity. Now, I’m not really big on activities in comic books if they’re inside in place of a story, but the inside back cover seems like a great place for it. This time, we’re treated to Mokey (with Katie Cook as the Ghost-artist) giving a Doozer drawing lesson.

Archaia Comics are committed to only three issues at this point (plus the half comic that was given out for Free Comic Book Day on May 1st), but I would definitely buy this every month if it becomes successful enough to go beyond the miniseries point (much like The Muppet Show Comic Book did).

These Muppet and Fraggle comics are exactly what comic book versions of outside media are SUPPOSED to be like.  Now who’s arm at Sesame Workshop do we have to twist to get a Sesame Street comic around here?