EDIT: Bohemian Rhapsody has returned to The Webby Awards YouTube page for voting. Muppet fans, go forth and vote!!

It’s that time of the year again: time for The Webby Awards to honor the best of entertainment on the internet. As I’m sure you all remember, last year Beaker’s “Ode to Joy” viral sensation won a People’s Choice Webby and Beaker even appeared to make an acceptance speech.

This year, to the surprise of almost no one, the Muppets biggest viral smash hit of all time, “Bohemian Rhapsody” has been nominated–and not just for a single Webby, but for two! That’s right, Animal and his Mamma crooning along with the antics of all the rest of the Muppets in the video have garnered them nominations in both the Music and Viral categories.

The competition in these categories is pretty stiff, such as “Auto-Tune the News,” “David After Dentist,” and “Lindsay Lohan’s eHarmony Profile,” but the Muppets had a pretty heavy early lead against them all (before they mysteriously disappeared from the ballot). 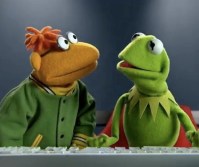 And, luckily, we Muppet fans can help them hold that lead! Yes, by simply visiting the Webby’s YouTube channel and registering we can vote to propel our Muppets to two victories!

On a slightly disappointing note, earlier today the Muppets Facebook page alerted us that “Bohemian Rhapsody” had somehow disappeared from the ballot of both categories. It has since been fixed, but in its time away the Muppets have slipped to second behind “David After Dentist.” Obviously this cannot stand, so it’s time once again for that great Muppet fan rallying we’re all so good at.

Get over to the Webby’s channel and register so you can vote, vote, vote!

And while you wait, why not vote for SesameStreet.org in its quest for a Webby?