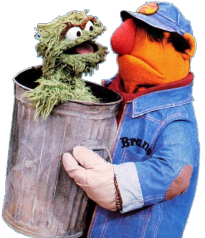 WHO IS BRUNO THE TRASHMAN?
Bruno is the full-body garbage man whose main duty appears to be to carry Oscar the Grouch’s trash can with Oscar inside of it. I don’t know if there’s ever been an on-screen explanation as to why, and I also don’t know if his usual silence has ever been explained on-screen, either. He must be strong, as he’s not only able to carry a trash can that Oscar is in, but he carries a can that’s apparently bigger on the inside than on the outside.

During the 1970’s, the Sesame Street cast would often tour around the country, but at first there was no effective way for Oscar to enter the stage. Eventually, Caroll Spinney became inspired to create and design Bruno as a way to bring Oscar on the stage and hide from the audience. There were openings in Bruno’s stomach and the back of the can for Oscar to come out of, and the arms are usually just attached to the trash can handles. Bruno’s usual silence combined with his hands being full by rarely being seen without holding the trash can allowed for Caroll’s hands to be free to perform Oscar’s body and left hand. But Bruno did have an invisible wire attached to his mouth for instances where he needed to open his mouth.

Supposedly, Caroll Spinney once asked the producers why Bruno wasn’t used anymore, only to discover that the character had disintegrated in storage, and the character was estimated to cost too much to rebuild.

BRUNO MOMENTS
Considering that Bruno was usually silent and pretty much a “vehicle” for Oscar the Grouch, most scenes with Bruno most likely focused more on Oscar and other characters, but Bruno did have some notable moments.

In “Big Bird’s Birthday, or Let Me Eat Cake,” Bruno showed off his roller skating skills, while also carrying Oscar’s trash can. Oscar had hoped for Bruno to knock over other skaters and maybe dent Oscar’s can, only to be disappointed with how good his skating was, while the adults were all amazed by his skills.

One rare instance where Bruno was seen without Oscar was as the bass singer for the do-wop group “Bruno and the Trashmen,” when they sang a song “In the Trash Can.” Bruno scatted and collected garbage from the other singers with a sparkly trash can.

WHY DOES SESAME STREET NEED BRUNO?
Well, for one thing, Oscar needs to travel somehow, right? Though Oscar has been known to travel with his legs sticking out of the trash can in the years before, during, and after Bruno’s existence. And Oscar has frequently been shown outside of the trash can, so it’s not like he’s permanently refined to being in a can.

Also, somebody needs to do something about the city’s trash. Sure, Oscar can just take it all, but I’m sure even Oscar couldn’t handle that much trash. The 40th season’s main lesson was on the environment… What better way would there be to give environmental lessons than to show a garbage man at work?

One thought on “Weekly Muppet Wednesdays: Bruno the Trashman”