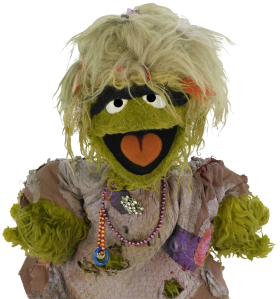 Best known role…
Oscar the Grouch’s “girlfriend;” one of the few female Grouches

WHO IS GRUNDGETTA?
Grundgetta is a Grouch. In fact, she’s one of the grouchiest Grouches around. But no matter how grouchy she may be, that doesn’t stop her from caring for Oscar. Somehow, the two have become close friends–though I’m sure neither of them would ever use the term “friends.” Some have even gone so far as to label Grundgetta as Oscar’s girlfriend–in fact, her official (albeit short) biography on SesameStreet.org refers to her as Oscar’s girlfriend.

Yes, Oscar and Grundgetta are truly a Grouch couple made in heaven (or, more likely, the other place). Both of them share an irritation with anything happy, sappy, and nice, both of them have pet worms (Do I sense a romance between Slimey and Sylvia too? Hmmm!), and, well, they’re both just grouchy!

It is perhaps their shared Grouch temperament that has kept them from tying the knot–after all, who wants a big, mushy wedding? Blech! However, I propose they reconsider the idea of marriage, if only so they can get divorced and make each other all the more miserable, thus all the more happy. (You know the old shtick.)

Grundgetta doesn’t appear very often on the Street, but when she does it’s always a fun ride. Some of Grundgetta’s greatest moments include “helping” Maria pick out shoes, portraying “Sleeping Grouchy” in one of Oscar’s fairy tales, giving Maria and Luis “insect attractant” and “sunburn cream” to take on their honeymoon, and, of course, her most recent claim to fame, basing POX News.

Yes, Grungie has recently become the target of a media firestorm against the Street for a joke in which Grundgetta claims that she’s tired of watching Oscar on GNN because it’s “too nice” and she’s going to switch over to POX News–“Now there’s a grouchy news show!”

For some reason, the pundits of FOX News (and elsewhere) blew the joke way out of proportion (as they always tend to do) and clips of Grundgetta insulting FOX News appeared all over the internet and various TV shows. Thankfully, most of the firestorm has blown over. However, we’ve still not heard Grundgetta (or her performer, Pam Arciero)’s side of the story. But maybe if you’re interested, you should check back at The Muppet Mindset tomorrow. (Yes, it’s a shameless plug! So sue me!) (Please don’t sue me.)

No matter what the media and tabloids may throw at her, Grundgetta will remain as grouchy as ever. That much is most definitely certain. 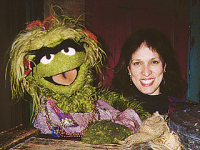 Grundgetta is the main character performed by veteran Muppeteer Pam Arciero. Pam has taken Grungie with her to numerous puppetry events across the country, giving the Grouch and even bigger profile. Hopefully we’ll see more of Pam and Grundgetta soon!

WHY DOES SESAME STREET NEED GRUNDGETTA?
Grundgetta plays an odd role on Sesame Street as Oscar’s true friend. She is one of the only things Oscar can stand to be around (or at least be grouchy with) and it’s quite interesting that he cares for her so much. This allows Oscar to become even more rounded and three-dimensional, showing that he can have feelings for someone other than malice and annoyance (albeit not very often).

Grundgetta may not be a main, extremely popular character on Sesame Street, but she is equally as important and an equally fantastic character. 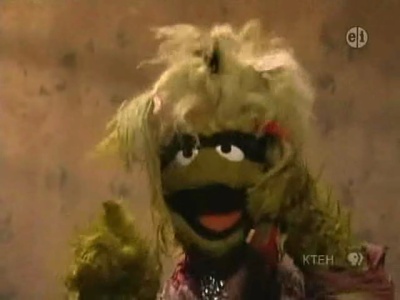