Sesame Street: A Celebration –
40 Years of Life on the Street
by Louise A. Gikow

Even Count von Count would be given a run for his money with Sesame Street: A Celebration – 40 Years of Life on the Street by veteran Muppet and Sesame Street employee Louise Gikow. This massive, hardcover book exploring, in incredible detail, the 40 years that Sesame Street has been changing the world as we know it is quite possibly the greatest piece of Sesame Street merchandise produced for the 40th Anniversary–perhaps of all-time.

Everything you have ever wanted to know, every picture you have ever wanted to see, every cast, crew, and Muppet bio you have ever wanted to read–they are all here in incredible detail. It is nearly impossible to truly comprehend every single shred of information presented in this book. I have examined every page four times in the two days I have owned the book and there are still chapters I haven’t read, still pictures I still haven’t dwelt nearly long enough on, still stories I haven’t laughed at, still quotes I haven’t been left stunned by, still magic that hasn’t touched my heart and soul in the way only Sesame Street can.

Every chapter of the book starts out on the set of the most famous Street in all the world–usually during the filming of an episode from the 40th season. These sections are beautiful and real and it feels like we, the undying fans of the show, are actually sitting in a director’s chair watching Elmo, and Big Bird, and Abby Cadabby goof around between takes. Each chapter then segues into a discussion of the past 40 years of the show. Every chapter follows this trend, just with a different theme each time. 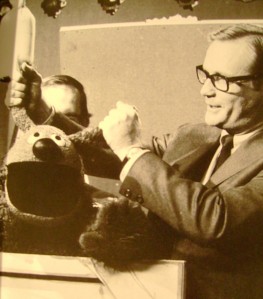 Scattered throughout every single page of the book are photographs of countless men, women, monsters, birds, dogs, Ernies, Berts, grouches, Counts, frogs, Snuffleupaguses, celebrities, and much, much more. The sheer amount and quality of the images here boggles the mind. Never before has such a revolutionary amount of never-before-seen Sesame Street photos been collected and put into one place.

There are at least 50 pictures of Susan, Gordon, Bob, Maria, Luis, Mr. Hooper, Oscar, Big Bird, Bert, Ernie Elmo, Grover, Cookie Monster, and more; at least 30 pictures of Kermit, Snuffy, Prairie Dawn, Caroll Spinney, Jim Henson, Frank Oz, and Jerry Nelson; at least 20 of Barkley, Herry Monster, Fat Blue, Richard Hunt, Fran Brill, and Martin P. Robinson; one picture of both Mr. and Mrs. Obama; and hundreds and hundreds more of everything that represents Sesame Street and all they have done and will do in the future. 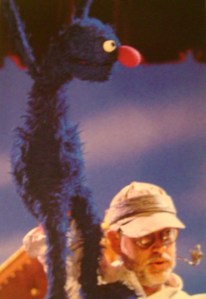 Never before has an official, invaluable resource on the scale of this been made available to the public. Everything on these pages is a call out to we, the hardcore fans of the show as kids and adults. Louis Gikow does an amazing job of writing the book as a love-letter to the fans. Every word feels so fresh and new that even the old story of how Big Bird grew out of his “big goofy guy” persona seems like brand new information.

There is just so much going on on every page in this book that it is impossible to truly do it justice in one review. There is so much information and there are so many pictures presented at every flip of the page that I could literally do a review of every two or three pages. (I won’t… but I could.)

It feels as if every person, no matter how minor, who helped and continues to make Sesame Street what it is today is represented here in full. From Jim Henson and Bob McGrath to one-season actor Ward Saxton and cameraman of Sesame Street‘s Camera 1, Frankie Biondo, who has been shooting the Street since day one–everyone is represented.

At the end of the day, this book represents every single thing that Sesame Street stands for–every single thing it has stood for since day one: teaching, smiling, laughing, loving, embracing, understanding, and sweeping the clouds away to bring another sunny day into our lives. This book will brighten anyone’s day with any page. I dare any Sesame Street fan to flip open the book to any page, see a picture of Luis and Maria dancing, Jon Stone wearing Bert as a hat, or Telly dressed as Bob, and not smile and have a day that is a little bit more sunny.

Buy this book, Sesame Street fans. A day won’t go by that you will regret doing so. C’mon, for years we fans have been asking how to get to Sesame Street, and now we have another clue to the answer: read and love Sesame Street: A Celebration – 40 Years of Life on the Street.

Buy your copy of this incredible book for only $26 with free shipping from Amazon.com today!

4 thoughts on “Sesame Street: A Celebration – 40 Years of Life on the Street Book Review”