Today on The Muppet Mindset we sit down with our British Corespondent as he reviews the recently sold script of Jim Henson biography film entitled The Muppet Man. The script was reviewed recently on the ScriptShadow blog where they included a link to download the script. Feel free to download and read and review the script yourself. But if you don’t feel like that, how about just reading our opinion piece? After all, that is why you’re here! Enjoy!

By The British Corespondent – I sat down this afternoon to work my way through a script entitled “The Muppet Man”. It’s the story of Jim Henson, and I had been warned that it was not an easy read. Written by Christopher Weekes – a relatively unknown writer with one writer credit, a director credit, and three actor credits to his name on IMDB – the screenplay contains a story in the present, intermixed with a variety of flashbacks, and fantasy moments. However, despite the warning, I was not prepared for what I began to read…which is how I found myself stifling sobs in the academic library on my university campus, hoping no one would ask me what was wrong because if I started sobbing, they’d be no stopping me.

But, before we get to that stage, there are a few questions I have for you. What do we know about Jim Henson? We know he had a grizzled beard, and long, lanky legs. We know he was a quiet man, never raising his voice. We know he was separated from Jane Henson, and we know that he created the Muppets. We also know that he put off visiting a doctor because he didn’t want to bother anyone…and we know how that ended.

That said: What is it that we want to see in a screenplay on Jim Henson’s life? I don’t know about you, but I always wanted to see him collecting tadpoles and cutting on green coats as a kid, creating Sam and Friends and falling in love, feeling a little lost in the sea of commerce, and finally achieving his dreams in true Muppet Movie, approximately how it happened, style. Along the way, it wouldn’t hurt to have him holding a few conversations with Kermit, Oscar and Cantus Fraggle – perhaps in dream form.

What do we imagine him to be? Inspirational, Rowlfian (word?), witty and alive as he sets about his work, changing the lives of those around him with his inspiration and peace.

I came to this screenplay with a huge grin on my face, eager to learn more about the man who made the Muppet universe come to sparkling, glorious light. I wanted to know what made him tick (besides Timepiece) and to watch him laugh with Frank and Jerry in the Henson Associates Studio and Jim Henson Company headquarters.

Instead, as I read this piece, I felt like a dirty, perverted voyeur – spying on things that were none of my business. And then I felt depressed, sucked into a downward spiral of misery. And then I just sat back, and felt empty, wondering why anyone would want to see this movie. Sorry, Mr Weekes, that’s just one fan’s opinion.

Right; on to the details.

Interspersed within these intersperses is a story about a drunken middle-aged Kermit realizing that he’s lost the love of his life Miss Piggy (who marries Link in the first scene). 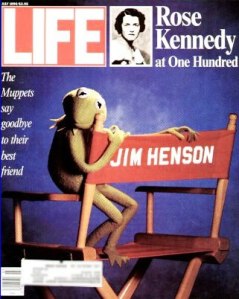 Yes, I did just say a drunken, middle-aged Kermit. And I did say that Miss Piggy marries Link. Here’s some description: “They all look so much older than we’ve ever seen them before. FOZZIE, now grossly obese, gets around on a MOVING CHAIR; GONZO has a LARGE HEARING TRUMPET; SCOOTER has entered a full blown mid-life crisis wearing LEATHER with piercings; and ANIMAL has gone BALD and GREY. KERMIT suddenly coughs and splutters something revolting up onto the SIDEWALK.”

There are moments in this story that charm; such as Jim and his brother Paul creating Square Eyes out of cardboard, after being warned about the dangerous effects of TV by their gran, or Jim Henson whimsically asking Jane to assist him with a Puppet program, from behind a tree, with Piere the French Rat. There’s a delightful scene with Frank Oz as Grover, and John Henson who is scared of monsters. There’s a scene with Jim and gang approaching large wooden doors and meeting a man on a swivel chair smoking a cigar as Frank whispers “We’re all right behind you.”  And there’s…wait, no. No, I think that’s it for the charming moments. Everything else is about as charming as the Land of Gorch. 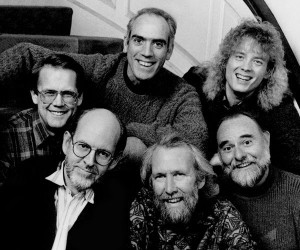 THE BAD
I’ll start with some puny nit-picky moments that annoyed me: In the script, Frank while performing Grover uses Contractions. “I’m” instead of “I am.” He does this not once, but twice. Is it wrong that I noticed that? Also, Jane invents the Karate Chop with an early version of Miss Piggy, and Gonzo blows his trumpet in the first episode of the Muppet Show, rather than using the ‘O’ as a Gong.

Other than that, I’m not sure what is fact and what is fiction so far as people and dates go. Did Jim really use his first pay-check to get fireworks over the bay saying, “Marry Me Jane”? Did he really have a first girlfriend called Jenny? Was Jim’s father a bit of a religious nut? Did Mary Hurt really reel off all of Jim’s unsuccessful attempts on Entertainment Tonight? Did Leonard Maltin really ask Jim this in an interview on the set of Labyrinth: “You seem worlds away from the vaudeville style of The Muppet Show with your new movie. (mocking) I almost have to ask…is everything alright at home?”

Those things can be forgiven. It’s a screenplay; it’s not real life fact. And most of them would have been caught by the fact-checker anyway. What cannot be forgiven the screenwriter is what he did to Kermit and Miss Piggy.

We know that Jim Henson was ill; but is there any evidence to say that he was losing his mind and grip on reality? When he starts to see Kevin Clash as Elmo, Miss Piggy bounding out of the audience on Arsenio Hall, and a thoroughly depressed Kermit gorging on chocolate on the foot of Jim’s hotel bed…I was upset and insulted. Showing Jim in this hanging-on-to-sanity-by-an-inch fashion was not called for, nor needed. Not only have that, but flashbacks of his gran as a Muppet…his teacher as a marionette, Kermit in the front seat of Jim’s car looking away whiled Jim and Jenny (again, who?) make out in the back… They are just so…out of place and weird.

And, if the Muppet elements are disturbing, everything else about this screenplay is simply depressing; as Jane feels insignificant and runs from the set of Sesame Street, pregnant and crying, as Jim moves to England and Jane says that she just doesn’t matter anymore, and in an utterly heart-breaking scene where she tells Jim about having sold her first painting, and how pleased she is. When he congratulates her, she says that she sold the painting 6 years ago and had been trying to tell him since. She says: “I love you, but you don’t belong to me. You belong to people I’ll never even meet.”

Cut to right after this, to Jim Henson struggling to hold back tears while the Swedish Chef at the end of his arm bounces meatballs off the table and Frank Oz rolls with laughter.

Instead of a portrait of an inspirational genius – we have a heart-broken man who never fulfills his dreams of creating a Muppet project for an adult audience.

Now, I completely understand that maybe this screenplay simply contains the truth. Maybe Jim Henson really was this sad, and maybe the world smiled around him while he sobbed beneath it, feeling utterly alone; but if this is true, then it begs the question: Do any of us want to see that on screen?

Do we need to see Kermit saying, “I am so depressed.” And telling Jim he is completely alone, “You’re talking to a piece of cloth.” Do we want to SEE Jim coughing up blood? Do we need to WATCH him having a fit in the hospital and dying without feeling he has ever fulfilled his dreams?

We don’t need to see that. Nobody does. There is no need. What will it achieve?

There is a thin line between reality and fantasy – Jim Henson taught that, through all his projects – but he didn’t dwell on the reality, he created projects that gave us a place to escape to such as Fraggle Rock or the Labyrinth. There is simply no need for the reality (if it is that) of Jim’s secret, behind-the-scenes life to be snarled at us from the silver screen.

NOTE ABOUT THE ENDING
I will say something about the ending. It’s beautiful. Kermit wonders through the hospital singing, “I’m Going to Go Back There Someday” from The Muppet Movie, as Jim struggles to breathe. And we have all the familiar scenes from the funeral, of butterflies and Muppets as Brian Henson reads a letter from his father, and Jane Henson finally realizes the impact her husband has really had on the world. 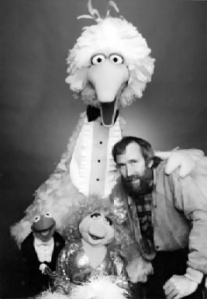 And then…there is something else yet. That old, depressed Kermit is back. And he’s learned from Jim that NOW is the time to act, and so he (in some really badly written Kermit and Piggy dialogue) tells Miss Piggy just how much he loves her, she karate chops Link, and the Frog and the Pig live happily ever after…

But…does that make it worth all the pain of reading the screenplay, or watching the film?

Have you read the script? Do you have a different opinion? Feel free to let us know!