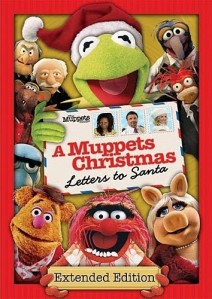 A Muppets Christmas: Letters to Santa is released tomorrow in the U.S. wherever DVDs are sold (except for street corners)! Check out Disney’s official site for the release, complete with video clips from the special! Keep an eye on The Muppet Mindset tomorrow for our official review of this exciting DVD release! If you absolutely can’t wait for that, check out these reviews!

ToughPigs has posted their review of the Sesame Street special “Families Stand Together.” It’s a fun read (as always) and deserves checking out! 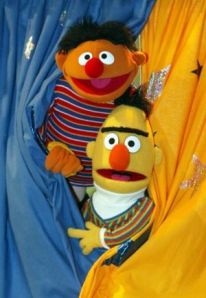 The Muppet Newsflash has reported that Sesame Workshop will re-release a set of long out of print Sesame Street music albums in the form of a 3-CD set billed as Sesame Street: Old School – Volume 1 on November 10, 2009, just in time for the 40th anniversary! The three albums included in the set are “The Original Sesame Street Cast Album” (1970), “Big Bird Sings!” (1974), and “Bert and Ernie’s Sing-Along”(1975). This marks the first time that these three titles have been released and remastered on CD. With the inclusion of “Volume 1” in the title, this implies that even more old school albums will be re-released onto CD in the future!

Ryan Dosier – Muppet Robin Hood, the first installment of BOOM! Studios’ Muppet fairytale comic book line (followed this month by Muppet Peter Pan and in January by Muppet King Arthur). Written by Tim Beedle and drawn by Armand Villavert, Jr., Muppet Robin Hood has the incredibly difficult task of following in the wonderful footsteps of The Muppet Show Comic Book. The Muppet Show, written and drawn by Roger Langridge, features classic, witty storylines and jokes along with near-perfect characterization of every character, while Robin Hood casts the Muppets into the roles of Robin Hood and the gang.

This story chronicles the classic tale of Robin Hood (What? You were expecting Hansel and Gretel, maybe?) starring Kermit the Frog as Robin Hood, Miss Piggy as Maid Marian, and all of the other Muppets as all of the other characters. Of course the story of Robin Hood as a strict retelling is rather boring, but a Muppet retelling can’t be—enter writer Tim Beedle. He does his best to create a Muppety feeling to this story.

Issue #1 was released May, 2009, with the other three issues following monthly afterwards.

PLOT
Most people know the plot of Robin Hood, but not many people know (or will ever know) the story of Muppet Robin Hood—even though they’re basically the same thing.

In issue #1, we meet Sir Robin of Loxley (Kermit) as he returns to England after three years in the Crusades with King Richard. But as Robin returns, he realizes his home is not how he remembered it to be. It’s been overrun by the scourge of the country, Prince John! Even Robin’s home of Loxley Linx has been replaced with a miniature golf course. The first three pages are back-story from the narrator, so it’s kind of hard to get immediately drawn in to this story, but I suppose it had to be done.

Soon, Sir Robin encounters the Sheriff of Nottingham (Sam Eagle) and his dopey sidekick Sir Guy of Gisbourne (Gonzo). The Sheriff stops Robin because he didn’t pay his admission to enter the mini golf course and they try to apprehend good Sir Robin. As you can imagine, that doesn’t happen, so the Sheriff and Guy flee. Robin then meets a young frog named Squirt (Robin, aptly renamed to avoid confusion—which is referenced a few times). Squirt tells Robin about more of the horror Prince John has wrought upon England, and Robin finally takes a stand to fight against the prince as he and Squirt ride off into Sherwood Forest (because Sherwood Woods just wouldn’t sound right).

After being (very) briefly introduced to Maid Marian (Miss Piggy) and receiving some plot exposition about her hatred of her uncle, Prince John, we return to Sherwood Forest with Robin and Squirt and receive more back-story before coming to a bridge where they’re attacked by a huge ogre (Sweetums).

The ogre tells the frogs that no one shall cross his bridge without paying a toll. Sir Robin, having no money (or just being obnoxious), engages the ogre in a staff battle (which, surprisingly, does not pit the staff of both Kermit and Sweetums against one another—because we all know Kermit’s staff would win that battle). After Robin defeats the ogre (and Louis Kazzager makes a brief cameo), the ogre, now identifying himself as Little John, joins Robin on his journey and takes him even deeper into the forest.

Here, Robin and Squirt are introduced to the Merry Men (Scooter, Janice, Rowlf, Rizzo, Lew Zealand, and the Swedish Chef). After some long, characterizing introductions, Sir Robin of Loxley proclaims his mission to bring justice back to England by becoming Robin Hood! A momentarily funny exchange between Robin and Much the Miller’s Son (Scooter) occurs, and issue #1 is over.

TONE
This one is hard to pin down. I can’t tell if the tone is trying to be more classic fairytale or more Muppet zaniness. Maybe it’s a mixture? I don’t know. I honestly just can’t tell. The tone never goes to the extreme of either end of the spectrum, however. It never becomes laugh-out-loud Muppety goodness, nor does it become so deathly boring and “storytelling” that it becomes unreadable.

Writer Tim Beedle creates an interesting tone here, but it’s really not Muppety for the most part.

The characterization is sadly not there for most of the characters. True, some of the characters have their “voice,” such as Sam Eagle, but most of them remain shockingly unlike themselves. Gonzo is the most glaring example of this. He’s not weird, he’s just hyper. Gonzo and Sam Eagle should make a hilarious, complete opposite comedy team, but the writing suffers so much that it just feels awkward and forced. 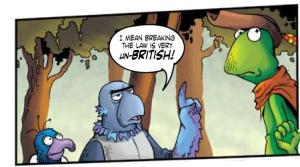 Sweetums is written rather well, with his loud, burly dialogue—each of his speech bubbles have a “rougher” looking text that makes it appear he’s constantly shouting.

The writing of Miss Piggy as Maid Marian is alright; but once again Piggy falls prey to outside writers assuming that she’s always angry or rude. Beedle could have taken a good tip from Langridge on how to write Miss Piggy. Unfortunately, he didn’t.

The hardest writing to comment on is Kermit/Robin Hood’s. Is he supposed to be Kermit or Robin Hood? Neither. He’s supposed to be Kermit playing Robin Hood. Yes, Kermit is hard to write for, so writing him playing another character is difficult as well, but… Jerry Juhl did it beautifully when Kermit portrayed both Bob Cratchit and Captain Smollett. Tim Beedle does not do it well when Kermit portrays Robin Hood, and it’s rather sad.

ART
This is the sad part of this review. Armand Vilavert, Jr.’s artwork is distractingly obscure. Again, we must compare this artwork to Langridge’s work in The Muppet Show Comic book. Vilavert, Jr. draws the Muppets, it seems, without really studying the puppets. While Langridge has been known to give Kermit and co. teeth when they don’t have them, it works in the scene and it makes his art stand out as unique. 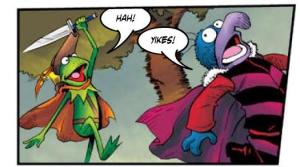 Gonzo is Vilavert, Jr.’s most glaringly bad illustration. His eyes are spread across his face, he usually lacks eyelids altogether, and in nearly every frame he has a bottom jaw full of teeth. This may sound harsh, but this version of Gonzo looks like a bad interpretation one would buy from a caricaturist at a carnival.

Not all of his characters are drawn poorly; his Scooter, Janice, Rizzo, Rowlf, Louis Kazagger, and Sweetums all stand out as fine examples of how to draw the characters. It’s just unfortunate and inconsistent that characters like Lew Zealand, Sam Eagle, Gonzo, Miss Piggy, and Hilda are all distractingly bad.

Thankfully, Kermit doesn’t suffer too much (though it’s hard to mess him up). Since he is the main character and he does appear in almost every frame, it’s good to see that he actually looks like himself. 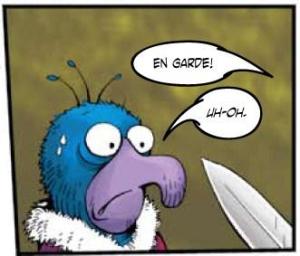 While Muppet Robin Hood doesn’t come close to matching up with The Muppet Show Comic Book in quality, it is still a fun read. This review may seem harsh, but once you see the artwork and read through some of the non-Muppety writing, you’ll understand why.

Although the beginning is tough to fight through, the writing in Muppet Robin Hood does pick up by the second and third issues (unfortunately, the art still suffers) once more characters are introduced to the plot, and it comes to a very satisfactory ending as well; but more on that next week. 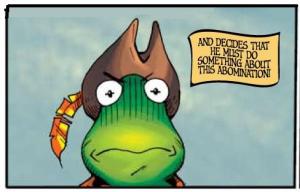 CAST
Kermit the Frog as Robin Hood; Miss Piggy as Maid Marian; Gonzo the Great as Sir Guy of Gisbourne; Sam Eagle as the Sheriff of Nottingham; Sweetums as Little John; Robin the Frog as Squirt; Scooter as Much the Miller’s Son; Janice as Willa Scarlet; Rowlf the Dog as Alan-a-Dale; Rizzo the Rat as Arthur a Bland; Lew Zealand as Rich the Fishmonger; The Swedish Chef as himself; Hilda the Wardrobe Lady as Maid Marian’s seamstress; Louis Kazagger as himself.