You know what they say, “Another day, another Muppet.” At least… that’s what we in Muppet fan circles say (or we will now, anyway). That’s right, it’s Weekly Muppet Wednesday on The Muppet Mindset. That’s the day of the week where we turn our collective attentions to the focus of a specific Muppet character. Each week we’ll highlight a different Muppet, showcasing their best appearances, quotes, songs, and more!

Memorable quote…
“We am, is, are, and be they whom am are known as The Electric Mayhem!”

WHO IS FLOYD PEPPER?

Floyd Pepper has been an integral part of the Muppets since his first appearance in Sex and Violence, the pilot episode for The Muppet Show. In the pilot, he played a hipster musician who hung out backstage and pestered Sam Eagle (as you can see, not much has changed in Floyd’s character). Within the pilot, he also performed in the debut appearance of Dr. Teeth and the Electric Mayhem–the band that would soon take the world (or at least The Muppet Show stage) by storm. With fellow band members Dr. Teeth, Janice, Zoot, and Animal, Floyd performed in the house band of the Muppet Theater, playing bass guitar. (No matter how unhip that theme song is.) The Muppet Show has been their biggest gig to date.

Once The Muppet Show began, Floyd was featured regularly in backstage plots along with Kermit and Fozzie. Floyd was always around to offer advice to the less-hip on how to be groovy, far-out, and way outta sight, man. But what was Floyd’s main reason for relaxing backstage? To bug Miss Piggy, of course! This always comes back to bite him, as Floyd would say, most literally.

In a few performances in the first season of The Muppet Show, Floyd’s singing voice was quite different from the voice fans have grown accustomed to over the years. The much-loved “raspy” tone of his voice is gone, instead replaced by a deep, bass voice (perhaps to match his deep bass?). This is best seen in Floyd’s early performances of “Ain’t’ Misbehavin'” and “Mr. Bassman.” In these early appearances, Floyd lacked the “blinking” quality of his eyes. They were immobile and looked more like sunglasses than the flexible eyelids they would become by the second season.

In the show, Floyd showed to have solid friendships with all of his band members. With Zoot, he performed various musical numbers and had a musician jokes sketch in episode 413 of The Muppet Show. With Dr. Teeth, he showed a bond in The Muppet Movie and other performances, when asked to take a solo in a song. Floyd is, of course, often regarded as Animal’s caretaker. Usually seen holding the chain of the ravenous wild thing, and even performing the song “Wild Thing” with Animal on the 1996 album “Kermit Unpigged.”

Floyd’s deepest bond within the Band lies with Janice. The mustachioed hippy and the aloof valley girl have been seen as a couple since around 1979, where Floyd was seen in the movie theater with Janice for the private screening of The Muppet Movie. When Janice asked Floyd if she could have some “fresh, organic popcorn” (for only a buck) Floyd responded happily, “Sure, mama! Nothin’s too good for my woman!” The duo have performed duets together many times on The Muppet Show, The Muppets Go to the Movies, and elsewhere.

Floyd was one of Jerry Nelson’s most prominent characters on The Muppet Show, mostly due to his heavy involvement in the backstage plots. Jerry and Floyd also have a lot in common: both are avid musicians, both are (reportedly) rather lazy, and both keep Animal on a short leash. Wait… scratch that last one. The leash isn’t short at all.

Jerry has been quoted as saying this of Floyd, “I always thought of Floyd as a character who had probably been a beatnik first, and then–just like real life–he was into jazz and poetry, and then he probably went along with the chase into rock and roll, because he needed a job. He drew the line at punk, as I probably did myself, I think. That’s why I can relate to Floyd, I guess, because he’s all those things.”

Jerry’s last performance as Floyd was in 2002’s It’s a Very Merry Muppet Christmas Movie. Thankfully, Floyd is now in the extremely capable hands of Matt Vogel, who trained with Jerry to understand the character. Matt has been performing Floyd brilliantly since 2008.

Floyd’s biggest contribution to the Muppet world is his singing voice. He has always been one of the greatest singers in the Muppets’ large repertoire. Some of my favorite Floyd songs include, “Blackbird,” “While My Guitar Gently Weeps,” “Lady Be Good,” “Man With the Bag,” “Gone Fishin’,” and, of course, “Can You Picture That?” and “New York State of Mind.”

Floyd was such a huge part of The Muppet Show, it’s no wonder that he has appeared in every Muppet movie to date. Floyd and the rest of the Mayhem were some of the original Muppets to follow Kermit’s dream and go to Hollywood with the Frog in The Muppet Movie. In The Great Muppet Caper, the Band had their own verse and instrumental section of the song “Happiness Hotel” and even performed their own number “Night Life” alongside helping Kermit and the gang protect the fabulous baseball diamond. In The Muppets Take Manhattan the Band played the music for Kermit’s show “Manhattan Melodies” and followed the Frog (once again) to New York City to be on Broadway–eventually leaving for a job as a polka band. Thankfully, they returned to help Kermit and Miss Piggy put on the old show. 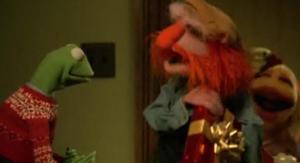 In The Muppet Christmas Carol, the Band played the music for Fozziwig’s Christmas Party in Scrooge’s Christmas Past. Even though he always appears alongside the band, Floyd is usually the one (in more recent productions) to speak out. In Muppet Treasure Island, he reminded Zoot to “just play the gig, never get involved in politics.” In The Muppets’ Wizard of Oz he grudingly explained to Miss Piggy/The Wicked Witch of the West that they were late to the gig because the band has “been drivin’ the same lousy bus since 1978!” He and the Band played back-up for Miley Cyrus, Demi Lovato, and David Henrie on Studio DC: Almost Live!, and he told Kermit that the band had to leave for vacation in Letters to Santa instead of embarking on a journey to the North Pole with the frog and friends.

Recently, Floyd has started to return to semi-prominence, with major appearances in the “Bohemian Rhapsody” viral video playing with the rest of the band and the OK Go music video for their cover of “The Muppet Show Theme Song” alongside Janice and Zoot. Floyd played a secondary role once again in The Muppets in 2011, playing the biggest part in inspiring Animal to drum again. Floyd remained the hippest of the hip among the Muppet cast in both The Muppets and Muppets Most Wanted in 2014. Right on.

WHY DO THE MUPPETS NEED FLOYD PEPPER?
This is a multi-tiered answer..

. The Muppets need Floyd for many reasons. He’s funny, he’s a part of the band, he’s an excellent singer, that LAUGH, his relationship with the other Muppets (the Band, Kermit, Miss Piggy)… but most of all, because he’s a part of the family.

Floyd is a huge part of the Muppets. Floyd is the hip older brother we all want to be like. An integral part of the family. He followed Kermit to Hollywood in The Muppet Movie, followed Kermit to New York City in The Muppets Take Manhattan, and would, no doubt, follow the frog anywhere (as long as he’s payin’).
But Floyd also needs the Muppets. Without the frog, who else could get the man and the band a gig? Not like anyone would’ve hired them before the frog discovered them in that church-turned-coffee house. Man, the Muppets need Floyd ’cause Floyd needs the Muppets. They’re the meanin’ for his bein’!
Even though he’s a secondary character (although just barely), the Muppets need Floyd. He’s the hip to this trip, baby. Without him these guys would be squaresville, man. And who wants to live in squaresville? So go watch some Floyd videos. Laugh at his laugh, love his voice, and nod cool-like at his hipster ways. Let’s make sure Floyd gets to shine once again. 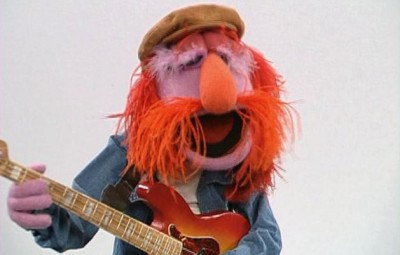